On the second day of the two-day summit, police officers were stationed on top of high-rise buildings overlooking BEXCO in eastern Busan, which was tightly guarded by ranks of police personnel.

People without ID cards were strictly restricted from entering BEXCO. Even those carrying an ID card were asked to undergo an airport-level body search, as they had to pass through metal detectors and have their belongings inspected.

On Monday, some people were even asked by security personnel to drink coffee and other liquids contained in lid-less cups to prove their harmlessness. 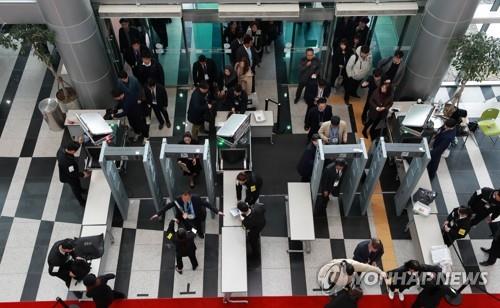 As word of the strict security checks spread, few people were seen carrying liquids into the BEXCO building on the second day of the summit.

Outside the BEXCO center, an unmanned security vehicle, named HR Sherpa, carried out its security and patrol missions after a public demonstration of its advanced technologies. Cameras are mounted on the top, front, back, left and right of the unmanned security vehicle to collect 360-degree images around the vehicle at night as well as during the day, and the images are automatically transmitted to a situation room.

The media center was crowded with about 1,000 Korean and foreign reporters covering the special summit.

Some broadcasters set up large-scale booths and live broadcast equipment in front of the main stage of the media center. Separate rooms were designated for working-level officials of each participating nation and for meals and rest for media workers.

Busan's tourist gifts were displayed along the aisles of BEXCO.

Roads leading to BEXCO were frequently closed to traffic in time for the movements of foreign heads of state. Some citizens complained of unexpected traffic controls but endured the inconvenience in consideration of the nationally important event.