South Korean Minister of Education Yoo Eun-hae signed an MOU with Laos' vice education minister on Korean education in the Southeast Asian nation on the sidelines of the ASEAN-Republic of Korea Commemorative Summit under way in Busan.

Under the MOU, the Laotian government will introduce Korean as a part of the regular curriculum at three pilot secondary schools next year. The Korean government will send Korean language teachers to Laos, support the fostering of local Korean instructors at Laotian universities and finance Korean study projects at a state-run university. 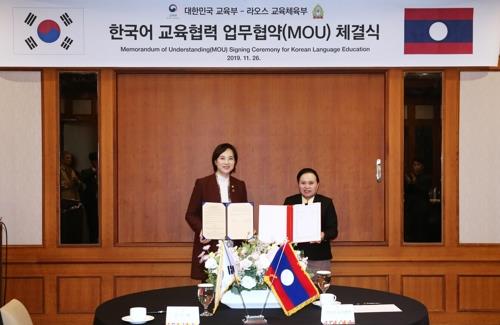 Myanmar and Cambodia have also agreed to introduce Korean education at some secondary schools on a pilot basis next year.

Five of the 10 ASEAN member states -- Malaysia, Vietnam, Indonesia, the Philippines and Thailand -- have already adopted Korean as one of their second foreign languages at secondary schools. Some 50,000 students at over 200 schools in the five countries are currently learning Korean.

As a result, the number of ASEAN member states where Korean is taught as a second foreign language will increase to eight next year.

The Ministry of Education said it aims to introduce Korean as a part of the regular school curriculum in Singapore and Brunei, too, by 2022, spreading Korean education to the entire ASEAN bloc. 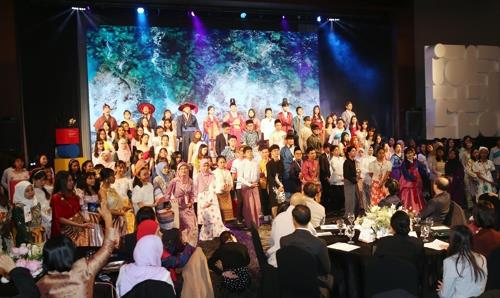 Meanwhile, the awards ceremony of the 2019 Korean Speech Contest for Secondary School, Junior College and College Students of ASEAN was held at the Grand Hotel in Busan on Tuesday, with about 150 students from 10 ASEAN countries attending.

A group of contestants wearing their own traditional clothes also performed a musical on Joseon Dynasty (1392-1910) King Sejong's invention of Hangeul, the Korean alphabet.