BUSAN, Nov. 26 (Yonhap) -- South Korea and the Association of Southeast Asian Nations (ASEAN) opened a new chapter in their strategic ties with their successful special summit in Busan, where they agreed on a "people-centered" co-prosperity vision.

The two-day ASEAN-Republic of Korea Commemorative Summit provided the Moon Jae-in administration with fresh momentum in its two-year-old New Southern Policy. It came as Seoul is confronted with a host of diplomatic setbacks, including a trade fight with Japan, a lingering THAAD row with China and pressure from the United States to pay more for American troops stationed in Korea.

In the Busan session that ended on Tuesday, Moon drummed up support from the leaders of 10 Southeast Asian countries for his Korea Peninsula peace initiative. He made the case that peace in Northeast Asia is closely connected with stability in Southeast Asia. 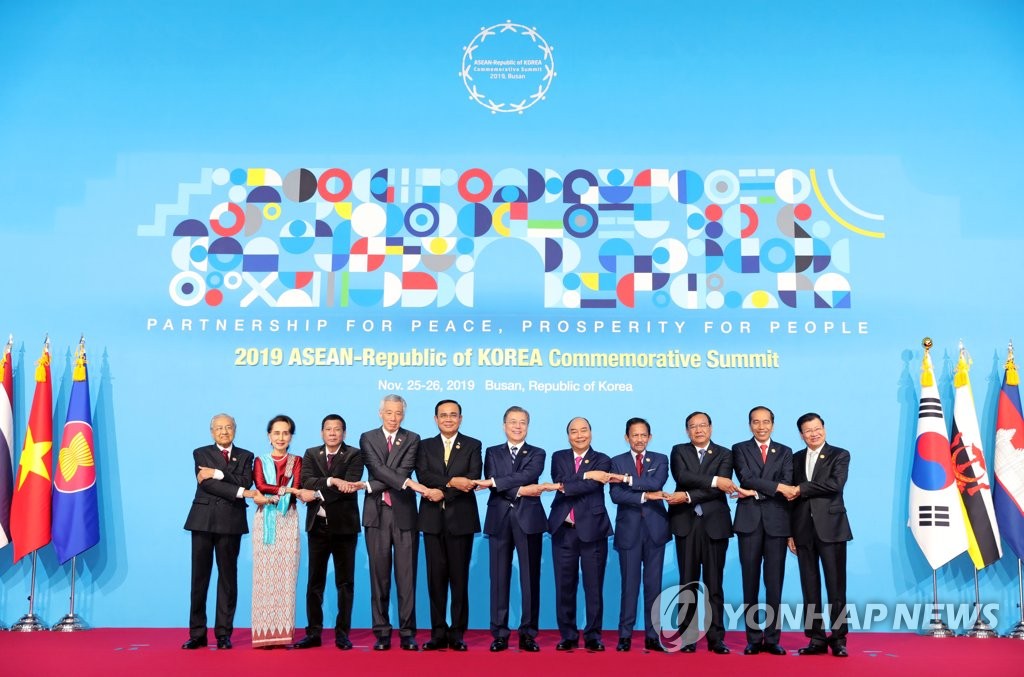 He asked ASEAN member states to keep sending a unified message both to Pyongyang and Washington for an early resumption of working-level denuclearization talks and substantive results.

ASEAN secured Seoul's formal support for its view on the Indo-Pacific concept. Moon stated that his government welcomes the ASEAN Outlook on the Indo-Pacific (AOIP), released in June, and that it's open to regional cooperation based on ASEAN centrality.

The AOIP is ASEAN's initial guideline to face the power play among regional powers, as it lies in the center of the Asia-Pacific and Indian Ocean regions. China is seeking to expand its influence with the Belt and Road policy and the U.S. is trying to counter it with the Indo-Pacific strategy. This AOIP reaffirms ASEAN's position of not siding with any major powers.

It has some implications for South Korea's dilemma between the campaigns of the two superpowers. Seoul's official stance is to push for its New Southern Policy in harmony with the Indo-Pacific strategy and the Belt and Road.

The biggest fruit of the special summit was that South Korea and ASEAN laid out a blueprint for future partnerships in the Joint Vision Statement for Peace, Prosperity and Partnership.

It sets the direction of far-reaching cooperation between the two sides, calling for building a "People-centered Community of Peace and Prosperity."

South Korea and ASEAN will team up for inclusive and innovative growth in response to the fourth industrial revolution, especially promoting cooperation in the startup and smart city sectors.

The key to partnerships, going forward, is a people-first approach, Moon said, adding it conforms to his personal philosophy as well.

It differentiates Moon's strategy on ASEAN from efforts by previous South Korean administrations to reach out to the bloc, according to Cheong Wa Dae.

The conservative governments of Lee Myung-bak and Park Geun-hye maintained a strategy of strengthening relations with four major regional powers -- the U.S., China, Japan and Russia.
Moon, however, is trying to upgrade Seoul's ties with ASEAN and India to the level of those with the big four.

South Korea and ASEAN agreed to "contribute to enhancing regional and international peace, security, stability, prosperity and partnership through the ASEAN-ROK Strategic Partnership which supports sub-regional, regional and multilateral cooperation in order to realize mutual benefits for our people," the statement read. 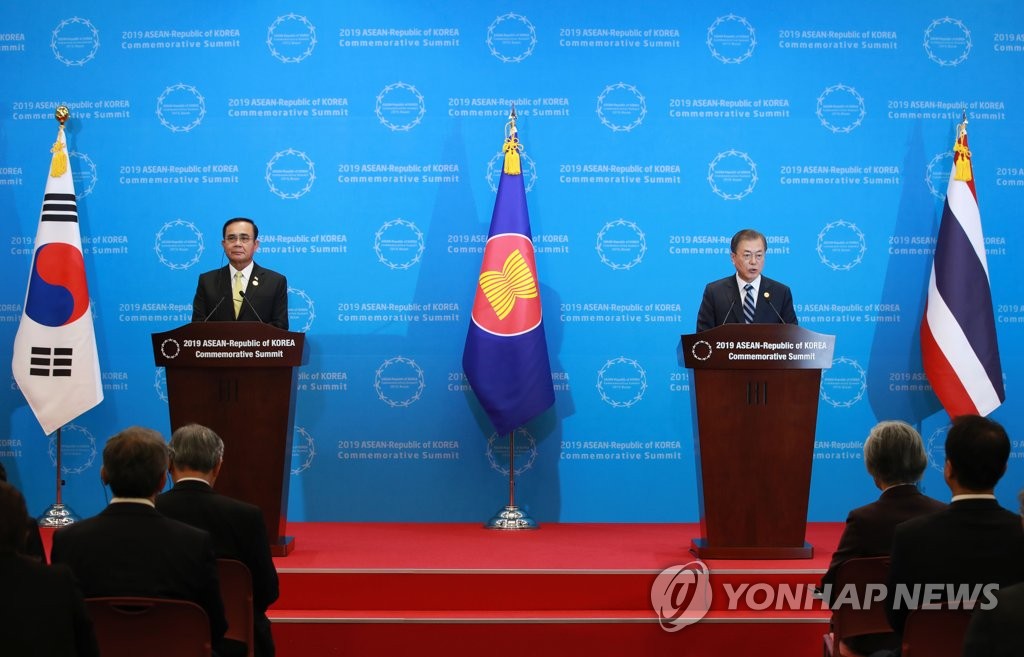 It states, "We also welcomed the ROK's commitment under its New Southern Policy to further strengthen relations with ASEAN in line with the three pillars of the ASEAN Community and appreciated the ROK's continued contribution to the region's development."

The Moon administration has paid keen attention to ASEAN's huge growth potential as a bloc with a population of 650 million and rich natural resources. Many people have a relatively good image of South Korea partly for their love of the K-culture.

The Busan summit served as a "precious chance for another leap in South Korea-ASEAN relations," Joo Hyung-chul, an adviser to President Moon Jae-in for economic affairs, said. He chairs the Presidential Committee on the New Southern Policy.

Their diplomatic ties began in 1989 with the establishment of a dialogue relationship.

South Korea hosted two similar group summits with ASEAN, one in 2008 on Jeju Island and the other in Busan in 2014.

Busan, located some 450 kilometers southeast of Seoul, is known as South Korea's maritime capital and is Moon's hometown.
Moon said the summit venue is meaningful as Busan is a gateway to the route to ASEAN.