SEOUL, Nov. 27 (Yonhap) -- National Assembly Speaker Moon Hee-sang has unveiled a new idea for resolving Japan's wartime forced labor issue as he proposed a bill to create a foundation to be funded by companies, governments and citizens of South Korean and Japan.

The move came amid expectations that Seoul and Tokyo will ramp up efforts to resolve the issue after the South decided last week to "conditionally" suspend the termination of its military intelligence-sharing pact with Japan.

Parliamentary officials introduced a draft of the bill to victims of the forced labor at a meeting held Monday.

It appears to be a step forward as Moon proposed an idea to set up a fund to be participated in by companies and citizens of the two countries during his trip to Japan earlier this month.

The bill calls for providing 300 billion won (US$255 million) in total compensation to some 1,500 victims of Tokyo's forced labor during the 1910-45 colonial rule of the Korean Peninsula.

Under the proposal, an envisioned foundation will comprehensively cover compensation for victims of Japan's wartime forced labor and sex enslavement.

It is not immediately known whether forced labor victims will accept Moon's idea.

The bill appears to follow the example of Germany's compensation for forced labor during the government of Nazi Germany.

The country set up a foundation to compensate forced laborers with contributions by the federal government and some 6,000 companies.

Diplomatic tensions between Seoul and Tokyo have intensified since Japan imposed export curbs against South Korea in July in apparent retaliation for the Korean court' rulings on the wartime forced labor issue.

Tokyo has reacted angrily to the South Korean top court's 2018 rulings that ordered Japanese firms to compensate the Korean victims. It claims all reparation issues related to Japan's 1910-45 colonization of Korea were settled in a 1965 state-to-state accord on normalizing diplomatic ties.

Moon plans to meet with lawmakers from rival parties later in the day to discuss details of the bill.

"Details of the bill could be subject to change as it will take into account various opinions," an aide to Moon said. 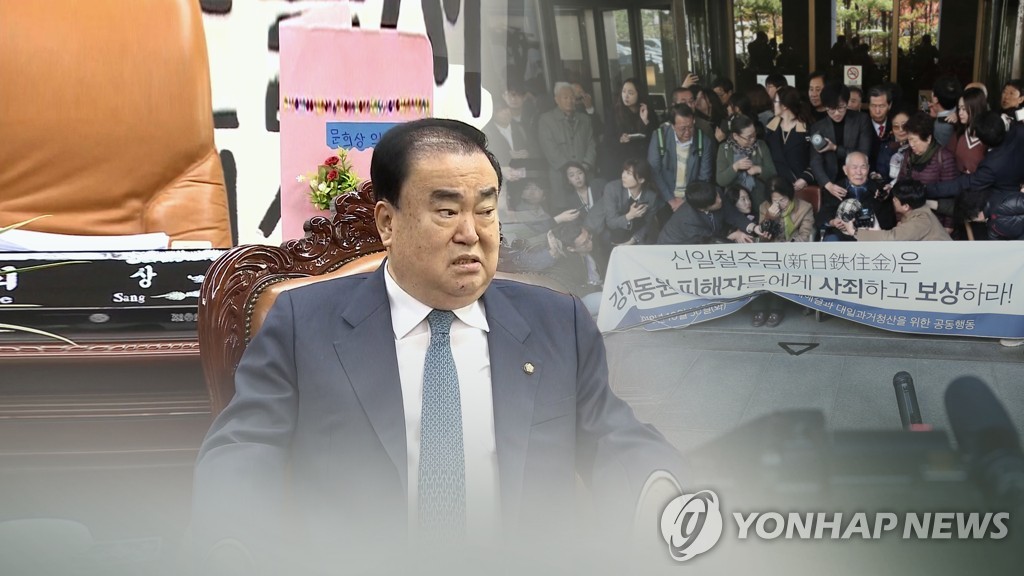