"There will be no games in the next few years that will be able to technically follow Lineage 2M," CEO Kim Taek-Jin told reporters on Sept. 5.

NCSOFT said Lineage 2M allows players to get a more realistic feeling when interacting with game objects such as monsters.

The mobile game is a follow-up to the online MMORPG Lineage II, which was launched in 2003. Other mobile entries in the series are NCSOFT's Lineage M and Netmarble Corp.'s Lineage 2 Revolution.

The global launch of Lineage 2M has not yet been announced.

NCSOFT said Lineage 2M is currently the only game supported by Purple but it expects future mobile games from the studio to be compatible.

"We expect Lineage 2M to bring market-beating revenues," said Lee Kyung-il, an analyst at Cape Investment and Securities Co., adding that the preregistered number for the game broke the 7 million-user mark in just 57 days. Over 5 million people preregistered for Lineage M in its first 53 days. 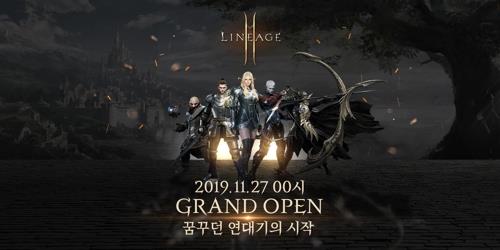