SEOUL, Nov. 27 (Yonhap) -- South Korea is keeping a close watch on a North Korean port near Mount Kumgang on the east coast, the unification ministry said Wednesday following a report that the communist nation may be developing it into a naval base.

The North has been constructing new buildings at the port of Jangjon and military vessels have appeared at the port more frequently than before, government officials said, though it is unclear if these signs mean the North is restoring the port as a naval base as reported by a newspaper earlier in the day.

The Jangjon port was originally the North's southernmost military port, but warships and military vessels were sent to other ports once the inter-Korean tourism project to Mount Kumgang began in the late 1990s.

Should the port turn back into a naval base, it would mean that the North is serious about its demand for the removal of South Korean-built facilities from the mountain resort, and it would dash South Korea's hopes for restarting the project.

"We are keep monitoring related moves in consultations with relevant agencies," ministry spokesperson Lee Sang-min told a regular press briefing, adding that the port has been serving both civilian and military purposes.

Last month, North Korea demanded the South remove all South Korean-built facilities at the scenic resort, saying that it will build a new international tourist destination of its own.

While Seoul has been insisting on holding face-to-face talks to resolve the issue, North Korea sent an ultimatum to the South earlier this month, warning it would take steps to pull down the facilities if Seoul does not tear them down itself.

Launched in 1998, the Mount Kumgang tour program was regarded as a key symbol of inter-Korean reconciliation and economic cooperation until its 2008 suspension. About 2 million tourists visited the mountain while the program operated. 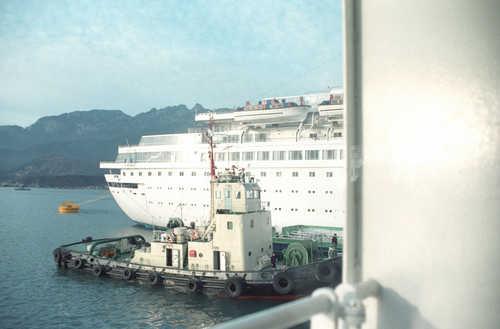