SEOUL, Nov. 27 (Yonhap) -- Customs officials in Incheon, west of Seoul, said Wednesday they have cracked down on huge amounts of imitation goods that infringe on the trademark rights of BTS, a globally popular South Korean boy band.

According to Incheon Main Customs, about 15,000 fakes of BTS' BT21 character products originating from China and other countries were detected at the port of Incheon in the first 10 months of this year. BT21 is a registered trademark of BTS. 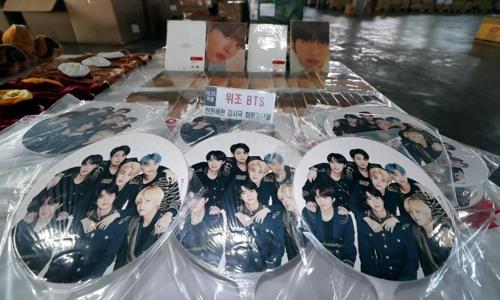 Importers of the fake character products had attempted to avoid detection by reporting those items as products that are not usually subject to import inspections by customs authorities, they said.

All the imitation products have been seized, and their importers will be punished for violating the Trademarks Law, they added.

Including those imitation goods of renowned character brands, the Incheon customs office has cracked down on fake goods worth 127.8 billion won (US$108.6 million) in 168 cases from January to October this year, marking an increase of 5.6 percent over last year's 121 billion won.