SEOUL, Dec. 1 (Yonhap) -- In the mobile application store business where only a few IT giants dominate the global market, it takes herculean efforts for newcomers to overcome the high entry barriers and make their presence known to industry players.

To survive in the market monopolized by Google's Play Store for Android devices and Apple's App Store for iPhones, three Korean telcos and the nation's leading portal Naver integrated their separate app stores and rebranded it as ONE store available on the Android platform in 2016.

It was not easy to bring the competitive industry rivals together and draw game and app developers to the new platform at first, but ONE store was able to achieve meaningful progress in the domestic app market with its competitive pricing policy and a "win-win strategy," according to its CEO Lee Jae-hwan.

"ONE store entered the app store market to break a monopoly by Google and Apple, and stimulate competition to benefit both app developers and consumers," Lee said in an interview with Yonhap News at the company's office in Pangyo, south of Seoul. "To expand the market presence, latecomers like us need to take a more aggressive approach." 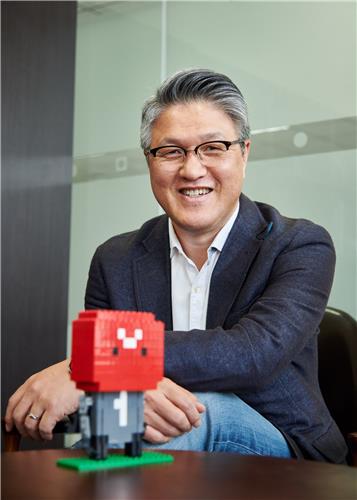 While major industry players charged 30 percent for game and app developers over the past 10 years, ONE store cut the rate to 20 percent in July 2018. For app providers with their own payment platform, the firm only charged 5 percent for its service.

As a result, the homegrown mobile platform has beaten Apple's App Store to become Korea's No. 2 app store, with about 50 million members and the transaction amount reaching 450 billion won (US$382.4 million) in 2018.

According to IGAWorks' mobile index, Google held a dominant lead with a 74.1 percent share in the Korean app store market, followed by ONE store with 14.9 percent and Apple with 11 percent as of the third quarter of the year.

The rate cut not only helped the firm to expand its presence in the domestic market but also improved profitability with an increased number of paid users, he said.

The firm's sales has risen for five consecutive quarters since the third quarter of 2018, and its operating profits turned to the black in the first half, its financial statement showed.

Its robust performance was propelled by the game category, having approximately 200,000 customers spending more than US$200 per month on average.

To accelerate growth, the former SK Telecom official said the company plans to focus on sourcing major mobile game titles by joint marketing and strategic investment, setting a goal of holding over 30 percent in the mobile game app category by 2022.

"The mobile gaming industry has a bright future with the commercialization of 5G and foldable phones, and the rise of immersive content," Lee said. "Although mobile games are a lucrative source of income, foreign app stores have been mostly benefiting from their platform business."

The global mobile game industry was valued at $107.1 billion in 2018, dwarfing PC games at $29.2 billion, according to industry researcher Newzoo. South Korea was the world's fourth-largest game market estimated at $5.6 billion, after China, the United States and Japan.

"We need to step up efforts to capitalize on the thriving game industry at home and abroad before it's too late," Lee said. "To encourage major game companies to upload their titles on ONE store, we need to grow to have economies of scale."

Buoyed by the early success on its home turf, ONE store plans to tap into the global market with alliances with major telecom operators and handset makers that are running their own app markets.

Lee said the company has been discussing various forms of alliances with Samsung Electronics and Chinese smartphone makers, as well as major mobile carriers in Southeast Asia and Europe, hoping to announce some forms of global strategy partnerships next year.

"The global alliance is aimed at creating a virtual global app market by connecting ecosystems with each other, allowing game companies to make a single version of their game to release it in multiple global markets," Lee said. "Under the new model, users will be able to enjoy more games jointly sourced by the alliance, not just those released by the respective app market."

On the back of the bold global expansion plan and robust performance, the firm last month raised 100 billion won of funds from a local private equity fund.

With the additional firepower, Lee said ONE store will bolster efforts to create an alternative global app store capable of competing with Google and enhance the app industry ecosystem.

"A monopolistic market is not healthy for both industry players and consumers," Lee said. "We need more competition, not only in the domestic market but also on the global scale."