Hyundai Department Store, the sole candidate, was picked to operate the duty-free outlet at Dongdaemun, northeastern Seoul, according to the Korea Customs Service (KCS). The site was previously operated by conglomerate Doosan Group,

Hyundai Department Store has operated a duty-free shop at its Trade Center branch in the affluent Gangnam Ward in southern Seoul since 2018.

"We plan to stabilize the duty-free business by bringing a synergy effect by operating two outlets in both southern and northern Seoul," said a company official who asked not to be named. 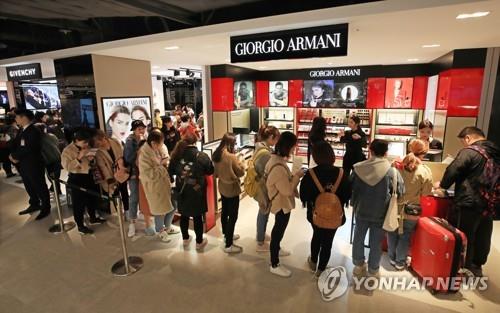 Earlier this month, Hyundai clinched a five-year deal to rent the duty-free shop site from Doosan for 10 billion won (US$8.5 million) per year.

Hyundai Department Store said it plans to officially open its Dongdaemun outlet by the first quarter of next year.

The duty-free shop business is suffering an industrywide slump, mainly because the number of Chinese tourists has fallen sharply since late 2016 due to a diplomatic row with Beijing over the installment of a U.S. missile defense system in South Korea.

But this year, Hanwha Group and Doosan Group decided to pull out of the duty-free business by closing down their Seoul outlets amid growing losses and heated competition.