SEOUL, Nov. 28 (Yonhap) -- North Korea fired two unidentified projectiles into the East Sea on Thursday, South Korea's Joint Chiefs of Staff (JCS) said, in the latest in a series of military moves amid stalled denuclearization talks with the United States.

The projectiles were fired from areas of Yeonpo in the country's eastern South Hamgyong Proince into the waters off the east coast at around 4:59 p.m., the JCS said in a release. No other details were immediately available, including the projectiles' type and flight range.

"Our military is monitoring the situation in case of additional launches and maintaining a readiness posture," the JCS added.

It is the 13th time this year that North Korea has carried out such a weapons test, with the last test-firing taking place on Oct. 31, when it fired two missiles from its super-large multiple rocket launcher towards the East Sea.

In previous tests this year, the North launched new types of short-range missiles, including its version of Russia's Iskander, as well as a upgraded version of a submarine-launched ballistic missile (SLBM), Pukguksong-3.

Further heightening tensions on the Korean Peninsula, the communist country carried out firing drills involving coastal guns on its border islet of Changrin in the Yellow Sea on Saturday under the guidance of leader Kim Jong-un.

The Seoul government sent a message to Pyongyang to protest the moves strongly and urged it to stop such acts, but the North has given no response.

In an apparent sign of ramped-up surveillance of the North, the United States flew three spy aircraft -- EP-3E, RC-135V and E-8C jets -- over the Korean Peninsula in succession for two days from Wednesday.

The military moves by the North came amid a lack of progress in the North's denuclearization talks with the U.S. Pyongyang has given Washington until the end of the year to put forward a new proposal that could break the deadlock, saying that otherwise it will be compelled to give up on negotiations and choose to take a "new way."

Washington has called on Pyongyang engage in dialogue, but the North has been dragging its feet while renewing calls on the U.S. to drop its "hostile" policy toward it. 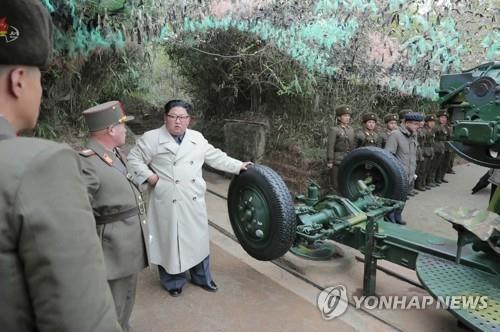