SEOUL, Nov. 29 (Yonhap) -- North Korea's latest "volley test-firing" of a super-large multiple rocket launcher indicates that the communist nation is almost ready to put the weapon into operation, though questions remain over its reliability and precision, experts said Friday.

On Thursday, the North fired two short-range projectiles in quick succession from a super-large multiple rocket launcher from its eastern town of Yeonpo into the East Sea. Both flew around 380 kilometers at a maximum altitude of about 97 km, according to South Korea's Joint Chiefs of Staff (JCS). 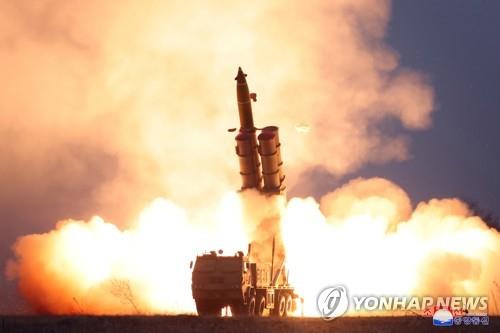 "The primary purpose of the latest test is to verify its continuous-fire system, and the 30-second interval means that North Korea was quite successful in securing the capabilities that its leader Kim Jong-un has called for," Shin Jong-woo, a senior analyst at the Korea Defense Security Forum in Seoul, said.

"During the October launches, the North flew the missiles from its western region, which was also deemed successful. Now that it also proved the successive firing system, North Korea appears to be prepared soon for mass production and deployment," he noted.

On Friday, North Korean media said, "(The) volley test-fire aimed to finally examine the combat application of the super-large multiple launch rocket system proved the military and technical superiority of the weapon system and its firm reliability."

The North's technical level is still considered low compared to advanced nations, as the U.S.' multiple launch rocket system is capable of firing projectiles within a five-second interval, and China's 400-mm large-caliber one logs six seconds between rocket launches.

But the North's new weapon will serve as another effective means for the bellicose regime to conduct a surprise attack against its immediate neighbor with greater destructive power, according to experts.

"We call it ToT, or time on target, where missiles could be fired either from a same unit or multiple units to hit targets at the same time though they are spread out," said expert Ryu Sung-yeop from the Korea Research Institute of Military Affairs.

The super-large launcher, believed to be a 600-millimeter caliber one, appears to have a maximum range of around 400 km, which puts most parts of South Korea in its reach.

"Multiple artillery launches in succession in a short period of time will complicate South Korea's air defense, as such launches are hard to detect and intercept," Ryun added.

Some experts also said the North could conduct additional tests.

"For its operational deployment, North Korea may need to fire four projectiles at one time, just as the system is designed to," a military source said. The launcher system uses a TEL with four tubes.

In the four tests so far, the projectiles were not aimed at specific targets but were meant to fly far. They were also believed to be fired from flat land, with the launcher being fixed on the ground.

"The North also needs tests to verify its precision, as well as to ensure if it is reliable enough to be used for field operations," Shin said.

The super-large launcher is one of the five new types of weapons that North Korea showed off during the 13 rounds of tests so far this year.

The weapons tests, which began in May after an 18-month hiatus, come at a time when denuclearization talks with the U.S. remain in limbo since the breakdown of the February summit between President Donald Trump and North Korean leader Kim. 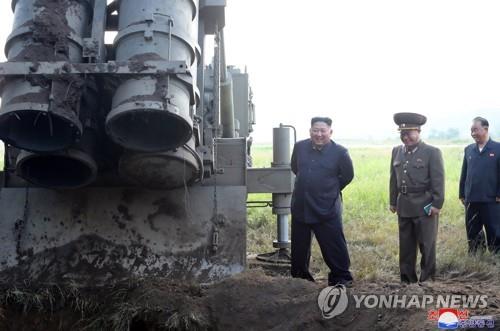