The conservative party approved a filibuster drive with a plan to have its lawmakers take turns speaking for four hours until the ongoing parliamentary regular session ends on Dec. 10, according to party officials.

A filibuster involves lawmakers speaking for extended periods as way to prevent a parliamentary vote or delay the passage of a bill.

Earlier in the day, the party filed for the use of the filibuster with the National Assembly on all 199 bills awaiting votes at a plenary session originally set for Friday.

The LKP is targeting key fast-track bills on electoral reform and a corruption probe unit as the legislation is likely to be put to a full vote after Tuesday.

"A 'fast-track' train that got off to an illegal start is driving South Korea off a cliff of despair and downfall," LKP floor leader Na Kyung-won told reporters.

"The LKP will start a peaceful and legitimate journey of protests. In that sense, we requested a filibuster." 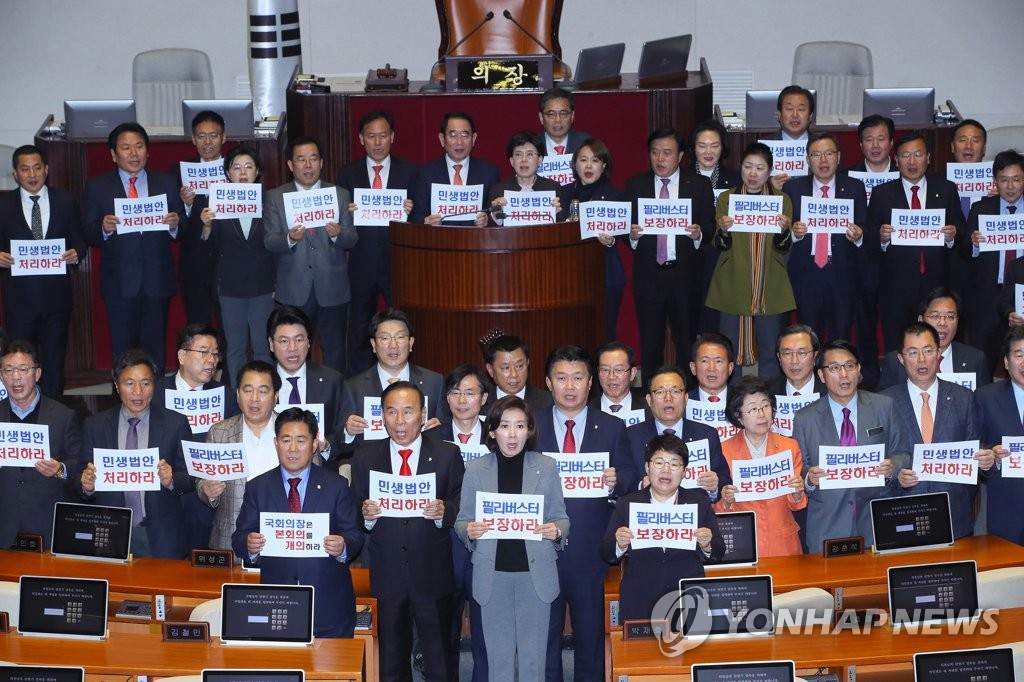 The LKP is playing hardball, demanding the cancellation of the electoral reform bill and the proposal to set up a new agency to investigate corruption involving high-ranking officials.

Later in the day, Na said she had discussed the plan with LKP chairman Hwang Kyo-ahn. Hwang announced an end to his hunger strike in protest of the bills on Friday. He was taken to hospital late Wednesday after holding his hunger strike for eight days.

Speaker Moon Hee-sang did not convene the planned plenary session, citing a lack of quorum, as the ruling Democratic Party (DP) and other parties refused to attend, demanding the LKP call off the obstructive tactics.

The LKP whip said, during a meeting with Speaker Moon Hee-sang and other floor leaders, she promised the party will take part in floor votes on uncontentious bills before beginning a filibuster, if Moon guarantees he will not put the election law revision to a vote.

"Speaker Moon promised so, but the DP rejected it, saying it would do nothing without the cancelation of our filibuster plan," she told reporters.

Na said later she suggested if the speaker ensures the party filibusters five bills, LKP will proceed with all other proposals.

She vowed to continue to use the filibuster in subsequent sessions.

"Our filibuster fight today was impeded by the DP and the speaker, but our struggle begins just now. Today we could not filibuster, but next time we will employ filibuster and other means," Na said after a late-night meeting with party lawmakers.

The ruling DP and three minor parties designated those bills as fast-track legislation in late April despite objections from the LKP.

The bill to adopt a new proportional representation system was automatically referred to a plenary session Wednesday.

Speaker Moon earlier announced a plan to refer the bill on the probe unit to a plenary session on Dec. 3.

Under the parliamentary law, if one third of lawmakers request a filibuster over a bill referred to a plenary meeting, unlimited discussions are allowed.

The LKP move will likely stall the handling of the country's 2020 budget bill. A legal deadline for the passage of the budget proposal is Monday.

Public criticism will likely mount as the filibuster will affect a host of bills linked to people's lives, including a revision to the road traffic act to strengthen children's safety in school zones.

Hundreds of bills were scheduled to be put to a vote Friday, including a set of three bills designed to improve accounting transparency for private preschools.

DP lawmakers held a rally at parliament to condemn the LKP for taking "hostage" of bills linked to people's lives.

"Stalling the passage of such bills with a filibuster amounts to paralyzing parliament," DP chairman Lee Hae-chan said.

"For the sake of the people and the nation, we will push for the passage of the political and judiciary reform bills," he said.

Minor parties rebuked the LKP's delaying tactic as a "tyranny" of the largest opposition party.

Filibuster was abolished in 1973, then re-introduced in 2012 when the National Assembly law was revised. It was part of efforts to prevent ugly scenes of physical scuffles among lawmakers over bill passages.

In 2016, the then-main opposition Minjoo Party, predecessor of the DP, staged a record-long filibuster to block a government-backed anti-terrorism bill. The measure was immediately put to a vote when the party ended the filibuster. 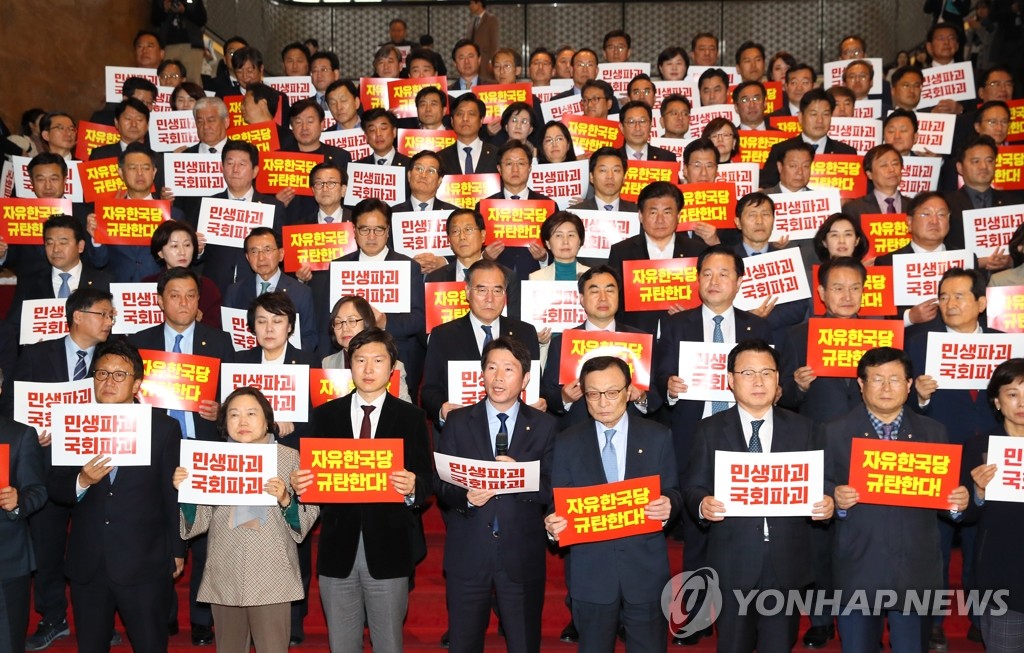