SEOUL, Nov. 29 (Yonhap) -- South Korea and Japan did not exchange military information with each other regarding North Korea's weapons test this week under the framework of their bilateral intelligence-sharing pact, officials said Friday.

On Thursday, North Korea fired two short-range rockets into the East Sea in a test of its super-large multiple rocket launcher. It was the North's first weapons test since Seoul decided last week to conditionally renew the General Security of Military Information Agreement (GSOMIA).

"Japan did not ask us to share intelligence with regard to the latest firings," a government official said, adding that South Korea likewise did not seek what Japan has collected regarding the latest test.

Following the test, Japanese Prime Minister Shinzo Abe labeled the projectiles "ballistic missiles" and vowed that his government will do its best to protect its people and their property in cooperation with the international community including the United States and South Korea.

The two neighbors used to share such information instantly via the bilateral tool, but such exchanges have been less frequent since South Korea decided in August to terminate the pact after Tokyo expanded export restrictions on Seoul.

The intelligence-sharing pact was supposed to expire on Nov. 23 after South Korea decided not to renew the three-year-old accord in response to Japan's export curbs on South Korea, citing security concerns, in apparent retaliation for South Korean Supreme Court rulings last year on wartime forced labor.

Hours before its expiry, however, the Seoul government said it would delay its expiry after Japan vowed to resume talks between their export control authorities.

According to Seoul's trade ministry on Friday, the two neighboring countries are scheduled to hold high-level talks with Japan in December over the trade row.

"We will continue to exchange military information with Japan, if needed, as the pact is still valid," another Seoul official said. 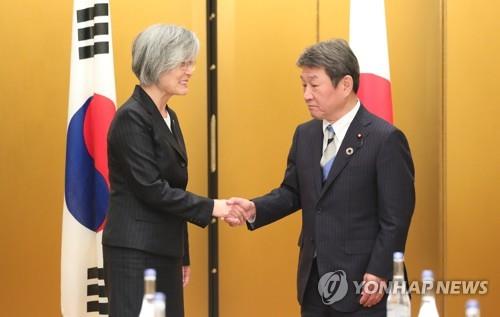