The Seoul Central District Court sentenced Jung, a disgraced singer and TV personality, and Choi, a former member of boy band FT Island, to six and five years, respectively, in prison on charges of sexually assaulting women in 2016.

Jung and Choi, both 30 years old, were indicted on charges of raping women during drinking parties in Hongcheon, Gangwon Province, in January 2016 and in Daegu in March of the same year, together with other members of a mobile chat room. 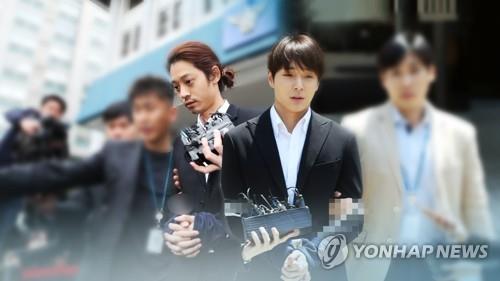 The local court also ordered Jung and Choi to undergo 80 hours of sex offender treatment and barred them from employment at children and youth facilities for five years.

In their previous joint hearings on Nov. 13, prosecutors demanded an imprisonment of seven and five years, respectively, for Jung and Choi.

Throughout their trials, Jung and his lawyer admitted to the charges of secretly filming and sharing sex videos but denied the rape charge, while Choi denied all criminal charges against him.

But the Seoul court issued a conviction ruling for the two, saying testimonies by their victims are trustworthy.

"Jung argued that his sexual act was done with mutual agreement, while Choi flatly denied having sex with the victims. But Jung confessed he had sex (with the women) together with Choi, and his confession was also proved by their KakaoTalk chats. In this sense, it can be recognized that they jointly raped drunk women," the court said.

The court also reproached the defendants for regarding women as a simple instrument of sexual pleasure by sharing their criminal acts in mobile chat rooms.

"Jung and Choi are singers who have enjoyed huge popularity. Thus they should assume social responsibility in proportion to their fame and wealth," the court said.

Jung is accused of recording sex videos with about 10 women he slept with and uploading them on a KakaoTalk messenger chat room in late 2015 to share them with other entertainers. Jung had gained wide popularity after appearing in popular entertainment programs.

Jung and Choi looked grim-faced throughout the sentencing trial and burst into tears after being given their prison sentences.

Meanwhile, an elder brother of singer Yuri and another defendant drew prison sentences of four and five years, respectively, for taking part in the sexual assaults with Jung and Choi, while a fifth defendant was given a suspended sentence of an eight-month imprisonment.