SEOUL, Nov. 29 (Yonhap) -- South Korea and the United States will resume negotiations next week on sharing of the cost of stationing American troops here after their latest talks broke down due to differences over how much Seoul should pay for its share.

Jeong Eun-bo, South Korea's chief negotiator for the defense cost-sharing talks, will meet with his U.S. counterpart, James DeHart of the State Department, in Washington on Tuesday and Wednesday (U.S. time), Seoul's foreign ministry said in a release.

The previous negotiations in Seoul last week were abruptly cut short as the U.S. side walked out of the meeting, accusing Seoul of failing to present a "fair and equitable" proposal.

The breakdown underlined wide differences between the two sides amid Washington's reported demand for a drastic increase of Seoul's payment by more than fivefold to nearly US$5 billion. 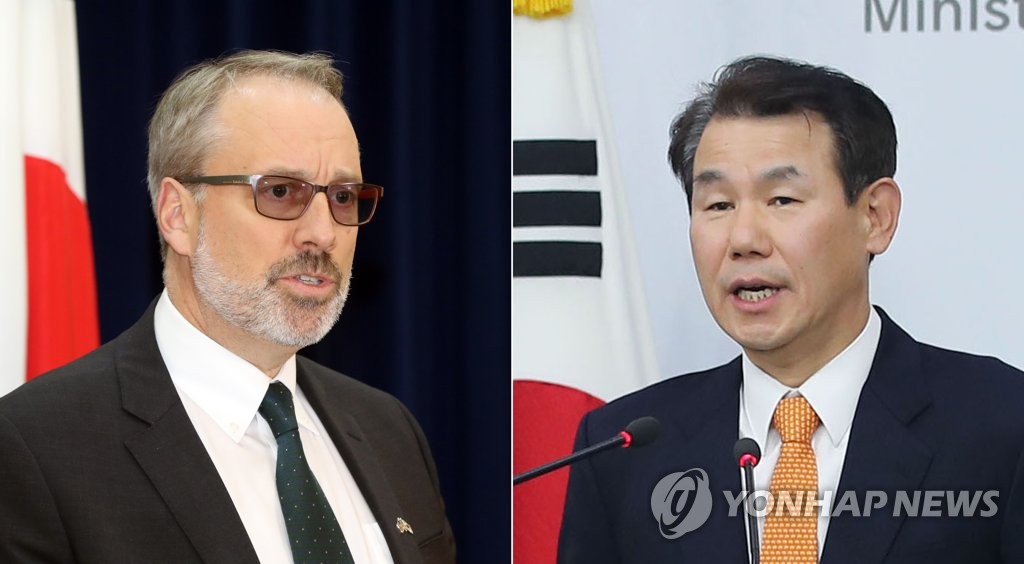 Calling off the talks, DeHart asked the South Korean side to come up with a proposal that would help both sides work toward "a mutually acceptable agreement."

Washington reportedly wants to create a new article in the cost-sharing deal, known as the Special Measures Agreement (SMA), in order to get Seoul to shoulder expenditures related to supporting American troops' families and conducting combined military exercises.

The current SMA requires Seoul to pay only for Korean civilians hired by the 28,500-strong U.S. Forces Korea, the construction of military facilities to maintain the allies' readiness and other forms of support.

Under this year's deal, struck in February, Seoul agreed to pay 1.04 trillion won (US$881 million), up 8.2 percent from the previous year. The current deal is due to expire at the end of the year.

Seoul has maintained that it has no intention of revising the SMA framework and that its financial contribution should be decided based on the current deal.

While the alleged $5 billion bill from Washington has led many observers here to wonder where that figure came from, a U.S. Defense Department's budget report estimated that it will cost about $4.5 billion to station troops in South Korea in fiscal 2020. That could suggest that Trump wants South Korea to pay for all costs of the U.S. troop presence.