SEOUL, Dec. 1 (Yonhap) -- A U.S. reconnaissance plane flew above the Korean Peninsula over the weekend, an aviation tracker said Sunday, in an apparent sign of beefed-up surveillance of North Korea following its recent test-firing of a multiple rocket launcher.

The U.S. Air Force's U-2S plane was spotted flying at an altitude of around 15,240 meters over the Seoul metropolitan area, northern Gangwon Province and central Chungcheong Province on Saturday, according to Aircraft Spots.

The plane, nicknamed the Dragon Lady, is known to have carried out a surveillance mission over areas surrounding the heavily fortified inter-Korean border with an aim to monitor North Korea's front-line military activities.

Before the North's test-firing of what it calls a super-large multiple rocket launcher Thursday, the U.S. military operated several surveillance planes over the peninsula.

The U.S.' monitoring efforts came as Pyongyang has been ratcheting up tensions through a coastal artillery exercise and other military activities ahead of the year-end deadline that it set for Washington to show flexibility in nuclear negotiations.

Nuclear talks between Washington and Pyongyang have yielded little progress, as the two sides still remain far apart over the scope of the North's denuclearization steps and what should be given in return. 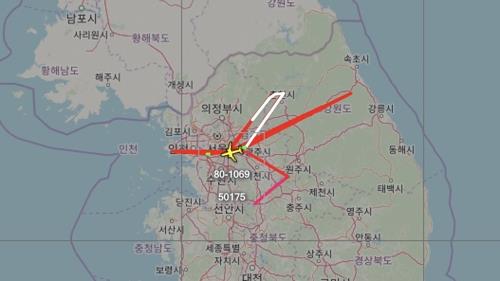