The service, which enables bank customers to use virtually all banking services of any bank here with just one smartphone application, will be formally launched on Dec. 18, the Financial Services Commission (FSC) said in a statement.

Since launching a trial operation of the service on Oct. 30, it has attracted 2.39 million users so far, according to the FSC.

A total of 5.51 million open banking accounts have been registered, with the number of transactions totaling 49.64 million, it added. 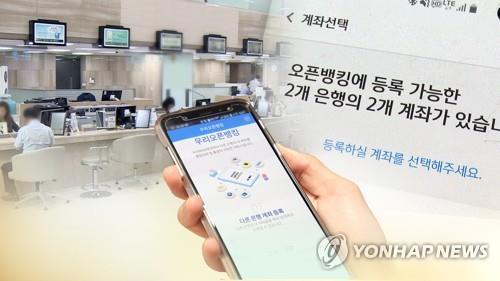 Eight other lenders, including Citibank Korea Standard Chartered Bank Korea and two internet-only banks, have either joined or will participate in the new service later.

A full-fledged launch will allow those banks to completely open their payment systems to fintech firms.

If payment services are fully opened, banks and fintech firms can compete in the payment industry and guarantee faster payments, officials said.

The government plans to promote instant payments by easing regulations and giving tax incentives to providers of faster payments, they said.

The country's financial regulator has said it may consider expanding the service to include smaller retail lenders starting next year.