South Korea imported 209,034 tons of U.S. beef in the January-October period, up 7.9 percent from 193,685 tons tallied during the same period a year earlier, according to data from the Korea International Trade Association (KITA).

U.S. beef regained a share exceeding 50 percent of the total imported beef market here for the first time since 2003, when South Korea halted imports of U.S. beef in the wake of a mad cow disease outbreak, KITA said.

In terms of value, U.S. beef imports reached US$1.54 billion during the cited period, up 10.4 percent on-year, KITA said.

U.S. beef maintained the No. 1 status after the country fully opened its market to imports in 2001.

Sales fell sharply here after the mad cow disease outbreak in the United Sates in 2003, which led Seoul to ban imports altogether, but restrictions were lifted in 2008. Australian beef was the No. 1 imported beef from 2004-2016. 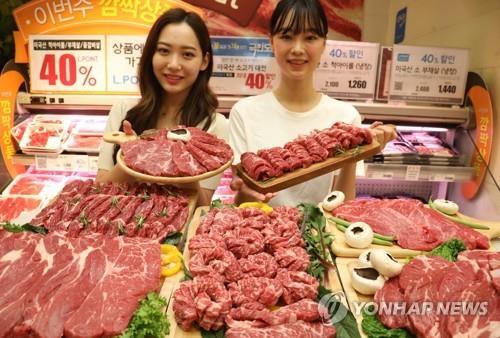