INCHEON, Dec. 2 (Yonhap) -- More than 100 Myanmar refugees who came to South Korea from camps in Thailand and other places from 2015 to 2018 have all successfully resettled in the Bupyeong district of Incheon, about 40 kilometers west of Seoul, government officials said Monday.

All of the 112 Myanmarese have chosen to live in Bupyeong and were praised for having successfully resettled as members of Korean society as they received excellent evaluations evenly on key resettlement indicators, such as employment and language, according to the Ministry of Justice.

Excluding an additional 17 Myanmar refugees in eight families who came here this year, all the refugees from the Southeast Asian nation are living in one community, the ministry said. 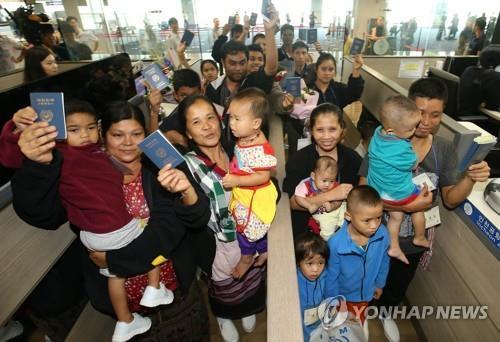 Bupyeong may have appealed to the Myanmar refugees because of its proximity to Incheon's Namdong National Industrial Complex and a subway station as well as low housing prices, ministry officials explained, noting support from local civic groups also played an important part.

They said most of the working-age refugees appear to have landed jobs at manufacturing companies in the Namdong industrial complex.

"The government has not designated any specific place of residence for Myanmar refugees, but most of them have voluntarily resettled in the Bupyeong district. Depending on individual tastes and conditions, they are expected to look for new places of residence after a certain period," a ministry official said.

In addition, the formation of a Myanmar community featuring a Myanmar temple, restaurants and grocery stores may have affected the refugees' decision to live together in Bupyeong, the official speculated.

The U.N. refugee resettlement project calls for accepting foreign refugees who wish to permanently migrate from overseas refugee camps to a third country, not their home country, after being recommended and screened by the United Nations High Commissioner for Refugees.

After arriving in South Korea, foreign refugees undergo basic social adaptation education at the Korea Immigration Service and are given housing rent subsidies for one year.

According to a report compiled late last year by a nongovernmental organization called Refuge pNan on the basis of a poll of 36 Myanmar adult refugees, five youths and 15 children, the refugees' employment rate was 60.5 percent -- 84.2 percent for men and 36.8 percent for women.

The figures are similar to those of Denver in the United States and much higher than those of Langley in Canada. The U.S. and Canadian cities have also accepted a similar number of Myanmar refugees in recent years.

Half of the Myanmar refugees living in Langley depend on social security benefits, whereas all of their counterparts in South Korea live entirely on earned income.

An official at Refuge pNan said the organization is currently supporting the education of 25 to 30 children from Myanmar refugee families and that their parents are all employed and financially independent.