Jeong Eun-bo, Seoul's chief negotiator for the Special Measures Agreement (SMA), made the remarks as he left for Washington to meet with his U.S. counterpart, James DeHart of the State Department, for a fourth round of the negotiations slated for Tuesday through Wednesday (U.S. time).

The latest talks come two weeks after the U.S. cut short the previous negotiations, held in Seoul in mid-November, in a rare public display of discord over the allies' sharing of the cost for the upkeep of American troops here.

"Though the U.S. side left the venue first during the last talks, we will make a deal that helps strengthen the Korea-U.S. alliance and the combined defense posture," he said, calling for a mutually acceptable deal "in any case."

Asked if the allies could strike a deal by the end of the year, he said he will try to meet the year-end deadline "in principle," but added that it "is subject to change" depending on how the negotiations go.

Jeong also said one more round of talks is expected to take place within this year.

The breakdown of the negotiations underlined wide differences between the two countries amid Washington's reported demand for a drastic increase of Seoul's payment, by more than fivefold to nearly US$5 billion.

Under this year's deal, struck in February, Seoul agreed to pay 1.04 trillion won (US$882 million), up 8.2 percent from the previous year. The current deal is due to expire at the end of the year. 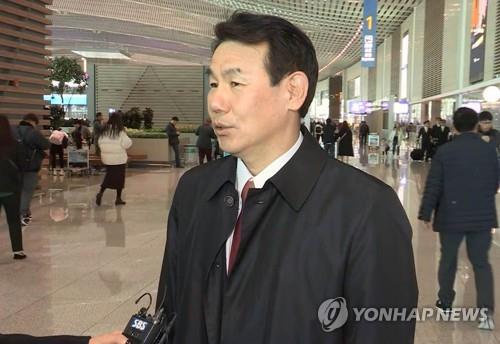