SEOUL, Dec. 2 (Yonhap) -- After suffering a sharp decline for a 12th straight month, South Korea's exports are tipped to improve going forward on the back of an improvement in the Chinese manufacturing industry and eased concerns over a lengthy trade dispute between the United States and China, analysts said Monday.

Outbound shipments by Asia's fourth-largest economy dropped 14.3 percent in November from a year earlier amid the protracted Sino-American trade row and an extended slump in chip prices.

The latest figures marked the longest drop since the 19 consecutive months of decrease seen from January 2015 to July 2016, according to the data from the trade ministry.

The interim trade deal between Washington and Beijing may be further pushed back with U.S. legislation supporting pro-democracy protesters in Hong Kong, possibly creating a last-minute hurdle in U.S.-China trade negotiations, but things will get better, according to the analysts.

"A two-digit decline in exports is likely to be moderate down the road and begin to improve from December," Oh Chae-young, an analyst at KB Securities, said. "China's November manufacturing index showed continued improvement." 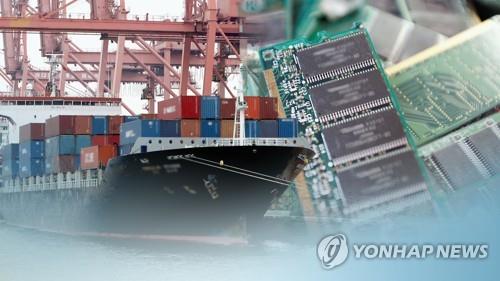 China's Caixin Purchasing Manager's Index (PMI), a key gauge of activity in the country's factories, rebounded to 51.8 in November, marking the fastest expansion since December 2016. A reading above the 50-point mark indicates expansion, while a reading below the 50-point mark signals contraction.

The index has hovered above the psychologically important 50-point level since August, easing concerns by suggesting that the world's No. 2 economy is increasingly resilient to the unprecedented trade row with the U.S.

"We need to be watchful of lingering uncertainties from a potential delay in the interim trade deal, as well as of struggling exports to non-China ASEAN partners," Kim Chan-hee, an analyst at Shinhan Financial Investment, said.

"Still, (South Korean) exports are expected to swing to positive terrain early next year on recovering demand and prices for chips, and monetary easing moves around the globe," Kim added.

South Korean exports of semiconductors, a key item for South Korea, continued to remain weak, nose-diving 30.8 percent to US$7.39 billion, taking up roughly 15 percent of the total outbound shipments, according to the trade ministry.

The chip prices are showing signs of stability, however, boding well for a rebound in the country's chip exports.

The combined revenue for NAND flash used in mobile devices reached $11.9 billion in the July-September period, up 10.2 percent from the second quarter, according to chip industry tracker DRAMeXchange. It is the first time in a year that the NAND flash market, which has grappled with high inventory levels and weak demand, posted on-quarter growth.

Other institutions are also projecting South Korea's exports to improve next year.

Earlier this week, the Korea International Trade Association said the country's outbound shipments will rise 3.3 percent on-year in 2020, marking a sharp turnaround from this year's estimated on-year drop of 10.2 percent.

Korea's exports tipped to improve down the road

Korea's exports tipped to improve down the road