SEOUL, Dec. 2 (Yonhap) -- Foreign investors continued to dump South Korean stocks on Monday, extending their selling spree to an 18th consecutive session, the longest in four years, data showed Monday, as they attempt to rebalance their asset portfolios amid the long-stalled Sino-American trade dispute and worries over an economic slump.

As of 5:04 p.m., foreigners had sold a net 4.3 trillion won (US$3.6 billion) worth of local stocks between Nov. 7 and Dec. 2, the longest period of selling in four years, according to the data compiled by the Korea Exchange (KRX). 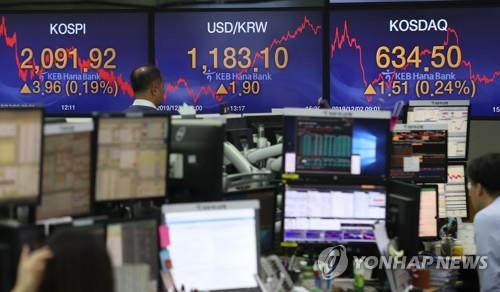 Also, the economy is widely expected to show the weakest performance this year in four years in the face of an extended slump in exports and still stagnant domestic demand.

"Foreign investors have been selling stocks at a remarkably fast pace over the past four months," said Park Sang-hyun, an analyst at HI Investment & Securities. "The November sell-off outpaced the previous one in May, when the local stock market tumbled on fears that the U.S.-China trade negotiations may fall through," he said.

"The massive foreign sell-offs were influenced by the Hong Kong human rights act and entailing uncertainties, as well as the British general election in December," said Choi Yoo-joon, an analyst at Shinhan Financial Investment.