According to the Jeju Tourism Association, a total of 13,985,000 tourists arrived in Jeju in the first 11 months of this year, marking an increase of 5.7 percent over 13,228,000 recorded for the same period of last year.

An average of 1.27 million people visited per month this year, it said, noting the daily average rose to about 40,000.

If the tourist arrivals increase at the current pace in December, the annual total will again exceed 15 million, the association forecast. 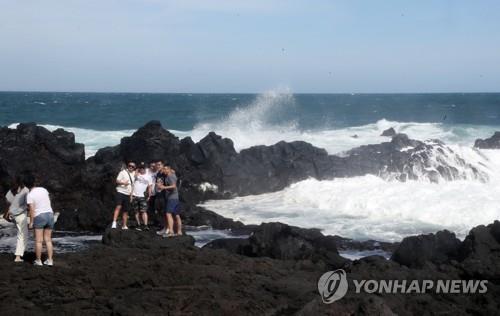 Jeju welcomed a landmark 10 million visitors in 2013. The annual total steadily grew to reach 15 million in 2016 but moved downward from 2017, due mainly to China's retaliation for the deployment of anti-missile defense system THAAD on South Korean soil.

The Jeju association said the number of foreign tourists to Jeju increased 42.1 percent on-year to 1.58 million in the first 11 months of this year. It noted individual Chinese visitors and tourists from Southeast Asia have steadily increased this year.

The association also said the number of domestic tourists to Jeju increased 2.5 percent to 12.41 million in the same period. It speculated that Jeju may have benefited from the ongoing South Korean boycott of Japanese goods and travel, as well as from cheap airfares.

Tourists to Jeju expected to top 15 million again this year

Tourists to Jeju expected to top 15 million again this year