The lackluster sales were mainly driven by lower demand in China and emerging markets amid uncertainties over a yearlong trade battle between the United States and China -- the world's two biggest automobile markets. 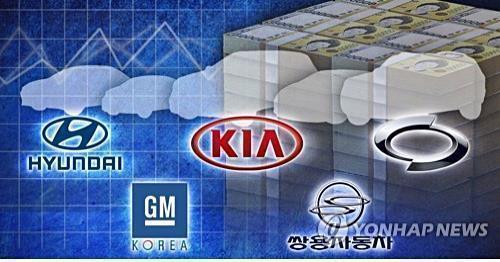 Hyundai and Kia, the country's two biggest carmakers by sales, reported no significant rebound in sales last month due to weak sales in China, the world's biggest automobile market.

For the rest of the year, they said they will focus on promoting new vehicles, such as the Grandeur sedan and the Kia K5 sedan, to bolster their sales.

The two, which aim to achieve their sales target of 7.55 million vehicles for this year, sold a combined 6.57 million units from January to November, down 2.7 percent from 6.75 million units in the year-ago period, the data showed.

Hyundai and Kia said they will continue to launch more localized models in China, though demand in the world's largest automobile market is not expected to perk up for the time being.

In China, Hyundai and Kia have been suffering declining sales due to tougher competition and lack of new models, though political tensions between Seoul and Beijing caused by the deployment of an advanced U.S. missile defense system, called THAAD, in South Korea in 2017 have since eased.

GM Korea's sales rose 1.8 percent to 39,317 units in November from 38,621 helped by increased sales of the midsize Colorado pickup truck and the Traverse SUV.

The company launched the Colorado in September and the Traverse last month. It is also considering adding the full-size Tahoe SUV to the lineup to meet rising demand for SUVs.

From January to November, the five firms' overall sales fell 3.7 percent to 7.23 million from 7.51 million in the same period of last year, the data showed.

Auto sales down 1.9 pct in Nov. amid slowdown

Auto sales down 1.9 pct in Nov. amid slowdown