SEOUL, Dec. 3 (Yonhap) -- Foreign investors' love for Kakao Corp. seems to be showing no signs of a letup, even during their weekslong sell-off spree of local stocks, on expectations that the operator of the country's most popular messenger KakaoTalk may get a further boost from its lucrative platform, content and fintech-related businesses, main bourse data showed Tuesday.

From July 1 to Dec. 2, foreigners net purchased Kakao stocks worth 747 billion won (US$629 million), second most behind Samsung Electro-Mechanics Co.'s 947 billion won, according to the data compiled by the Korea Exchange (KRX).

Foreigners continued to pick Kakao by net buying some 179.2 billion won worth of Kakao stocks during the Nov. 7-Dec. 2 period, when they sold over 4 trillion won worth of local stocks for 18 consecutive days, the longest in four years.

Foreigners' growing appetite for Kakao came as they bet its earnings will further improve down the road, aided by robust performance of its platform businesses and expectations about its online banking business.

Kakao's net profit in the July-September period skyrocketed to 51.1 billion won on a consolidated basis, nearly six times higher than a year earlier, according to its regulatory filing.

Yeo Min-soo, co-CEO of Kakao, attributed the numbers to the firm's robust revenue from its platform and content businesses.

During the three-month period, Kakao's revenue from its platform business surged by 39 percent on-year to 350.7 billion won thanks to the steady growth of Biz Message and other new businesses, such as Kakao Mobility and Kakao Pay.

The company's revenue from the content business expanded by 25 percent on-year to 432.4 billion won in the third quarter mainly on strong performance in e-commerce, games and music streaming services.

Kakao's growth potential is further backed by its efforts to converge mobile-savvy technology and finance.

In the January-September period, Kakao Bank's net profit rose to 15.4 billion won, shifting from a net loss of 15.9 billion won a year ago, according to the data compiled by the Korea Federation of Banks.

During the same period, K-Bank's net loss widened to 74.2 billion won, compared with a net loss of 58 billion won from a year earlier.

"In 2020, Kakao likely will begin harvesting the fruits of its investment in the subsidiary companies," said Ahn Jae-min, an analyst at the NH Investment & Securities Co.

Kakao has already secured some 44.4 million messenger app users, a reliable factor to boost the company's sales in the ad business, he added. 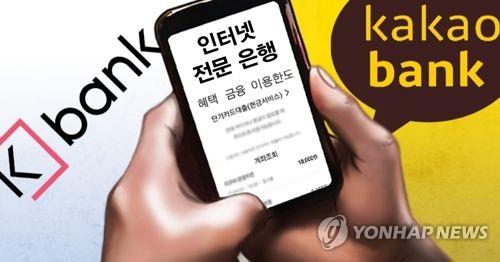