Boosting the wages and income of ordinary households here is a key economic policy of the liberal Moon Jae-in administration, which seeks the "innovative and inclusive" development of Asia's fourth-biggest economy.

"The Moon Jae-in government has been pursuing a shift in the current economic paradigm toward income-led growth, innovative growth and a fair economy, under the vision of overcoming low growth and polarization and creating a people-centered economy," Hong Jang-pyo, who chairs the presidential Special Committee on Income-led Growth, said during an international forum in Seoul.

Critics, however, have argued that the income-driven growth policy has deepened economic troubles, particularly for small shop owners, as well as small and midsized firms.

Hong admitted that there has been a heated controversy over the issue since the beginning of the current government in May 2017.

"Looking back over the past 2 1/2 years, we have seen some achievements, but there is still a long way to go," he stressed in his opening address at the International Conference on Income-led Growth with the theme of "Income-led Growth in Korea from a Global Perspective." 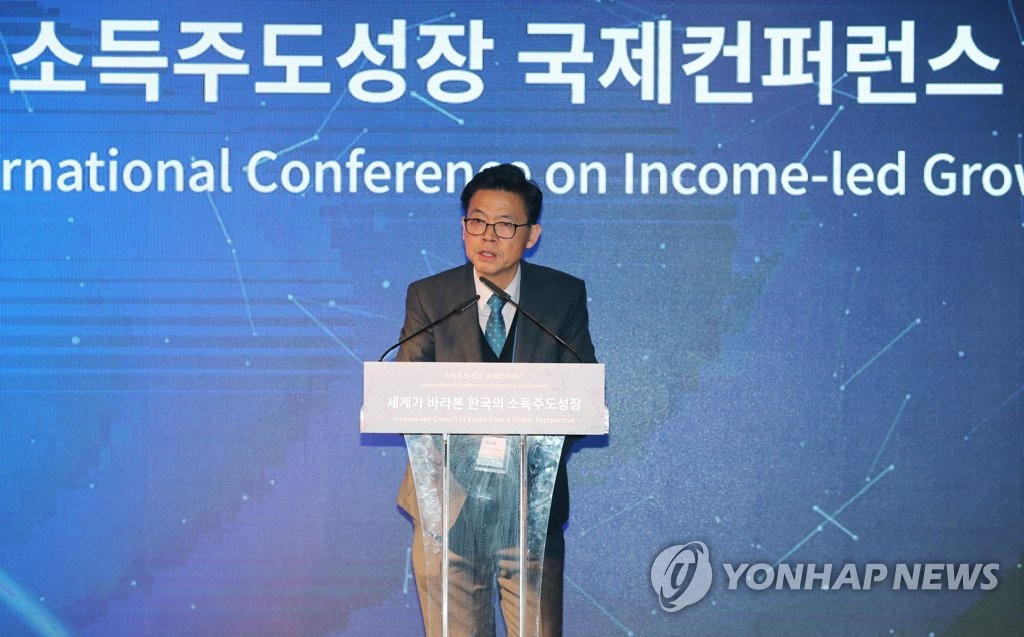 He cited some positive results, such as a recovery in job creation, an increase in employment rates and a narrowing of the income gap shown in the third quarter household trend survey.

"But more issues remain to be resolved," he added. "In particular, the most urgent task will be to respond to structural changes, such as changes in the industrial structure related to the restructuring of core manufacturing industries, demographic changes, such as an increase in the aging population, and a decline in the young population, reductions in jobs and new forms of employment arising as the fourth industrial revolution continues, while at the same time increasing the growth potential of our economy through constant innovation."

As with all policies, he added, the government's income-led growth and innovative growth policies are "not complete."

"Policies need to evolve as they are adapted to actual economic conditions or receptiveness on the part of the reality," he said.

He called for a constant focus on structural reform to change the characteristics of the economy from a long-term perspective, rather than sticking to short-term results.

Ziga Zarnic, adviser to the OECD secretary-general on inclusive growth policy issues, recommended that South Korea adopt a "balanced approach taking both efficiency and equity concerns into account" to create opportunities for all and attain sustainable growth.

"While Korea has demonstrated an outstanding capacity to catch up with the most-advanced economies, several dualisms have driven discrepancies in the economy," he told the forum.

Chiara Criscuolo, head of the OECD's productivity, innovation and entrepreneurship division, pointed out that the digital revolution, globalization and rapid population aging are having a "profound impact" on the nature of jobs and the way work is organized in South Korea.

"The key challenge is not the risk of mass unemployment, but the risk of greater disparities in access to quality jobs," she said. "In the face of deep ongoing changes in skill needs, Korea will need to move away from a model of front-loaded education -- whereby recognized skills are mainly developed in schools and universities and subsequently used at work -- to a system in which skills are continuously updated throughout increasingly longer working lives."