SEOUL, Dec. 3 (Yonhap) -- Army Chief of Staff Gen. Suh Wook pledged Tuesday to develop laser, stealth and other weapons systems in the next decade, saying such high-tech weapons will be "next-generation game changers" on future battlefields.

The top Army officer presented the 10 fields of development in a keynote speech during the two-day Korean Mad Scientist Conference that began in Seoul on the day co-organized by the Army and the Korea Institute for Science and Technology.

"We are witnessing a paradigm shift in terms of warfare in line with advanced science and technologies ... Securing next-generation game changers is badly needed to better prepare for future warfare, which will be expanded into a five-dimensional theater," Suh said.

He then called for the achievement of unmanned, high-powered and super-precision weapons and systems.

In order for the stated 10 visions to take shape as reliable weapons systems in a decade, the Army vowed to make efforts in close cooperation with civilian experts and to further exchanges with the U.S. military. 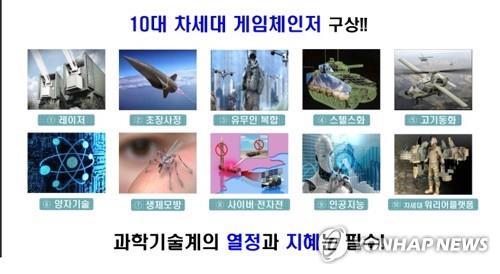