(ATTN: UPDATES throughout with Trump's remarks, details)
By Lee Haye-ah

WASHINGTON, Dec. 3 (Yonhap) -- U.S. President Donald Trump said Tuesday that it is up for debate whether keeping American troops stationed in South Korea is in the U.S. national security interest.

Trump's comment to reporters in London is one of the strongest indications the U.S. president could consider reducing troops in the South if Seoul refuses to accept Washington's demands on defense cost-sharing.

The U.S. president has been in the British capital to attend a meeting of North Atlantic Treaty Organization leaders, where he is expected to press NATO allies to meet their target in defense payments.

"It can be debated," Trump said when asked if it was in U.S. national security interests to continue to have 28,500 troops stationed in South Korea.

"I can go either way," he said. "I can make arguments both ways. But I think it's -- I do think this. I think if we're going to do it, I think it's -- you know, they should burden share more fairly." 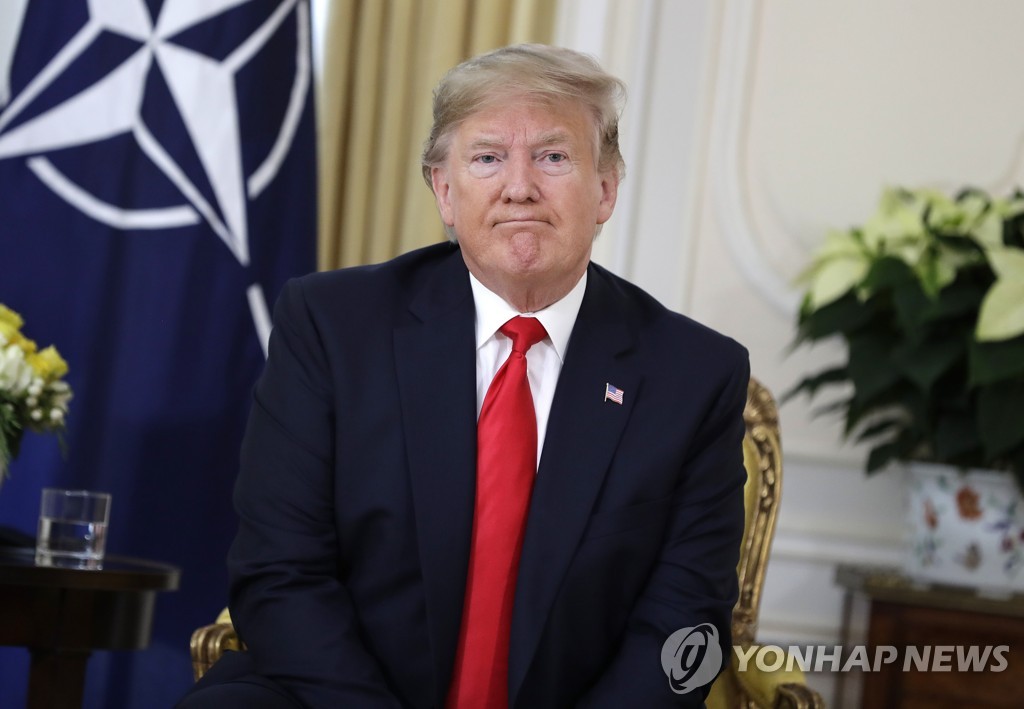 Trump's comment came hours before South Korean and U.S. negotiators opened their fourth round of negotiations in Washington on renewing the allies' defense cost-sharing deal, called the Special Measures Agreement.

That suggests the U.S. president was using the threat of a troops reduction to clinch a favorable deal in the negotiations that are slated to run through Wednesday.

South Korea has said that its goal is to negotiate within the framework of the current SMA, which expires at the end of the year.

Under this year's SMA, Seoul agreed to pay US$870 million for Korean civilians hired by U.S. Forces Korea, the construction of military facilities and other forms of support.

"We're starting a negotiation for billions of dollars," Trump said in London, claiming that he had gotten South Korea to pay $500 million more a year for "protection."

Before that, Trump said, South Korea had been paying less than $500 million for what was costing the U.S. "billions" a year.

Trump made similar claims in February, saying South Korea had agreed to pay $500 million more "with a couple of phone calls" from him.

The numbers did not align with the formal announcement at the time that South Korea agreed to pay $870 million this year, an increase of 8.2 percent from the previous year.

"We have a very good relationship, but we think it's fair that they pay more," Trump added, saying South Korea is a "very rich country."

Last month, the South Korean daily, Chosun Ilbo, reported that the U.S. is considering withdrawing a brigade from South Korea in the event that Seoul refuses to accept Washington's demand in the cost-sharing negotiations