WASHINGTON, Dec. 3 (Yonhap) -- South Korea and the United States on Tuesday began their fourth round of negotiations on sharing the costs for the upkeep of U.S. troops in the South, with the two sides apart on how much of the burden Seoul will shoulder.

Jeong Eun-bo, Seoul's chief negotiator, arrived in Washington on Monday for talks with his American counterpart, James DeHart. The negotiations are slated to run for two days through Wednesday.

The U.S. has reportedly demanded that South Korea increase its contribution fivefold to nearly US$5 billion next year. Under this year's deal, called the Special Measures Agreement, Seoul agreed to pay $870 million, an increase of 8.2 percent from last year.

In London, U.S. President Donald Trump made his position clear that South Korea "should burden-share more fairly," saying it is up for debate whether keeping 28,500 American troops in that country is in the U.S. national security interest.

Trump is in the British capital to attend a meeting of North Atlantic Treaty Organization leaders.

"(Trump) has always said that (South Korea) should pay more, so I don't think there has been a big change in terms of the situation," Jeong told reporters upon arriving at the State Department to meet with the U.S. team.

He refused to answer when asked what alternatives the South Korean side came prepared with.

The previous round of negotiations in Seoul last month was cut short after the U.S. side walked out, citing South Korean proposals that "were not responsive to our request for fair and equitable burden sharing." 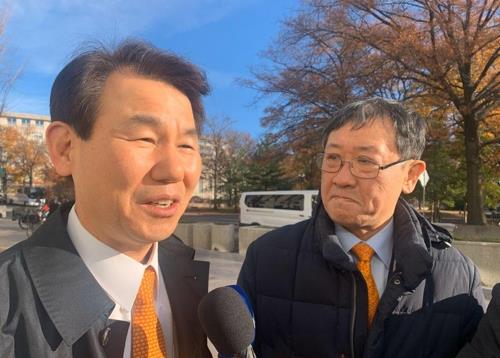