SEOUL, Dec. 4 (Yonhap) -- U.S. President Donald Trump's remarks about the possibility of using force against North Korea appears intended to warn against possible provocations ahead of the year-end deadline the regime set for Washington to show flexibility in their deadlocked nuclear talks, analysts said Wednesday.

Trump made the threat of military action on Tuesday, just hours after the North reiterated that the deadline is approaching and warned that it is entirely up to Washington what "Christmas gift" it wants to get.

North Korean leader Kim Jong-un has set the deadline for Washington to come up with an acceptable proposal to move forward the nuclear negotiations, warning that Pyongyang could otherwise take a "new way."

"Now we have the most powerful military we've ever had and we're by far the most powerful country in the world," Trump told reporters during his trip to London to attend a meeting of North Atlantic Treaty Organization leaders. 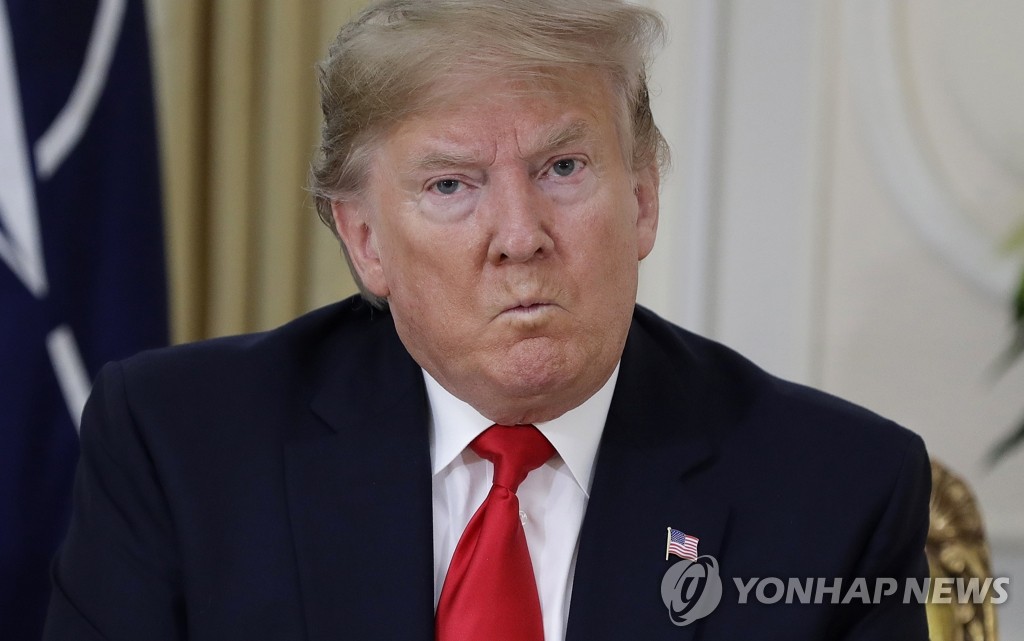 Ahead of the deadline, Pyongyang has been ratcheting up tensions by firing short-range projectiles, pressing ahead with provocative military drills and hardening its rhetoric against Seoul and Washington.

Its saber-rattling has raised fears that Pyongyang could revert to a provocative tack and bring to naught Trump's much-trumpeted personal diplomacy with the North Korean leader, particularly ahead of the U.S. reelection battle.

Apparently mindful of the possible provocations, the U.S. military has been beefing up its surveillance activities by deploying a set of reconnaissance assets over the peninsula in recent weeks.

"Trump hit back as the North talked of the 'Christmas gift.' He might have felt the need to stake out his position that he would not back down in the negotiations going forward," Shin Beom-chul, a senior fellow at the Asan Institute of Policy Studies, told Yonhap News Agency.

On Tuesday, North Korean Vice Foreign Minister Ri Thae-song mentioned the Christmas gift, which observers said might indicate that the regime could gradually escalate pressure on the U.S. through provocations, possibly including a launch of a longer-range ballistic missile.

Ri also pointed out that his country has tried hard "not to backtrack from the important steps it has taken" in a reference to a moratorium on nuclear and long-range missile tests and other measures it has taken to demonstrate its commitment to denuclearization.

"The DPRK has done its utmost with maximum perseverance not to backtrack from the important steps it has taken on its own initiative," he said. "What is left to be done now is the U.S. option and it is entirely up to the U.S. what Christmas gift it will select to get."

His statement was the latest in a series of remarks by former and current North Korean nuclear negotiators, which have appeared to hint at Pyongyang's growing impatience over a lack of progress in denuclearization negotiations with Washington.

For the North, a failure to meet its supreme leader's deadline is a humiliating setback that could trigger a provocative move by the regime or upend the ongoing nuclear diplomacy, analysts warned.

However, the U.S. president may not feel so anxious given that he could want to maintain the current status quo -- in stark contrast with the dangers of war on the peninsula in 2017 amid his threat of "fire and fury" and the boasts by both Trump and Kim of the "nuclear button" on their desks.

But a shift for the worse in the current security landscape could raise questions over his foreign policy chops already challenged by a slew of problems such as the protracted trade war with China and tensions with Iran, to name a few.

"The continuation of the current status quo would be good for Trump. So I think Trump's remarks on the possible use of military force were intended to strengthen deterrence against North Korean provocations," Woo Jung-yeop, a research fellow at the Sejong Institute, said.

The worst scenario for Trump could be Pyongyang conducting a nuclear test or firing off an intercontinental ballistic missile, which could pose a direct threat to the continental U.S. and debunk his claim that security situations are better off now than under his predecessor Barack Obama.

Nuclear talks between Washington and Pyongyang have yielded little progress, as the two sides still remain far apart over the scope of the North's denuclearization steps and what should be given in return.

The two sides last held their working-level negotiations in Sweden in October. The North declared that the talks broke down, accusing the U.S. of having come to the negotiation table "empty handed, while the U.S. cast the talks as good discussions.