WASHINGTON, Dec. 3 (Yonhap) -- U.S. Special Representative for North Korea Stephen Biegun said Tuesday that the United States will not give up on negotiating with North Korea to dismantle its nuclear weapons program, apparently responding to Pyongyang's demands that Washington meet an end-of-year deadline.

Biegun made the remark at a yearend function organized by the Korea Foundation in Washington, hours after North Korea warned it is up to the U.S. what "Christmas gift" it will get.

The statement from North Korean Vice Foreign Minister Ri Thae-song was an apparent threat to resume testing of nuclear weapons and intercontinental ballistic missiles unless the U.S. shows flexibility in their stalled negotiations before the end of the year. 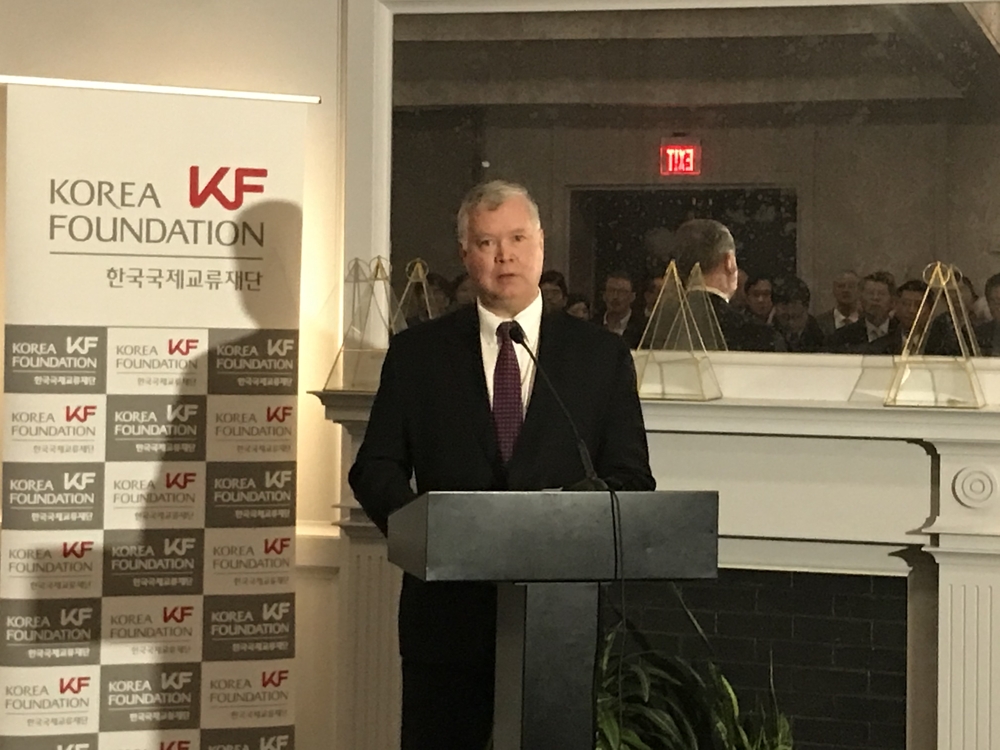 The negotiations have been deadlocked since the no-deal summit in February between U.S. President Donald Trump and North Korean leader Kim Jong-un due to gaps over how to match the North's denuclearization steps with U.S. concessions.

Biegun admitted that it has been "a long year."

"It's been hard work for our entire team. And it's, in many ways, been exhausting but not without its rewards," he said. "Obviously, we have not made as much progress as we would have hoped at this point, but let me be absolutely clear: We have not given up and we will not give up on what we're doing."

Biegun made similar remarks last month during his confirmation hearing for his nomination as deputy secretary of state, the No. 2 job at the State Department.

Dismissing the North's yearend deadline as "artificial," he said the U.S. "will be at this as long as it takes."

He also said at the hearing that if the North Koreans revert to "provocative steps" after the so-called deadline passes, it would be a "huge mistake and a missed opportunity" for the regime.

On the South Korea-U.S. alliance, Biegun said Tuesday that the two countries are "more than allies" and sounded mindful of the recent resentment South Koreans have expressed toward Washington for demanding significant hikes in their contribution to the costs of stationing American troops.

"We are friends," Biegun said, noting that he has been to Seoul so many times in the past year that he considers the place a "second home of sorts."

"Obviously, there are constant requirements for all of us, within our respective political systems, as well as between each other, to both prove the value of the alliance, and also to reaffirm its purpose," he continued. "And we have to do this, cooperating together in a manner that is fair and balanced and sharing the costs and the burdens of that alliance.

"This has always been the challenge for us," Biegun said. "We should prove the value of this alliance because it does have value for all of us and if all of us do so, I have no doubt that it will continue to serve our mutual interests for many decades to come, regardless of the shifting sands of geopolitics that come before us."