The 23-year-old solo artist and former member of disbanded boy group Wanna One will have a hiatus from show business after being diagnosed with the mental health problems in the first half of this year, according to Konnect Entertainment.

"(Kang) has complained of extreme anxiety recently ... leading to the conclusion that what should be considered the top priority for the health and safety of the artist is relaxation and rest," Konnect said in a statement.

The agency also said Kang "is in a very difficult condition to promote the new digital single, 'Touchin,'" indicating that he will not be available for stage promotion of the song released last week.

The announcement came one day after Kang complained of immense mental suffering from online hate comments.

Posting a message on Tuesday in his online fan community, Kang said "I am under immense pain. I wish somebody could please save me."

Kang became a breakout star through the second season of Mnet's K-pop audition show "Produce 101" in 2017. He was the top winner of the competition show and debuted as part of Wanna One, formed by the cable TV program.

As the boy group disbanded in January last year, Kang launched a solo career with his first solo album, "Color on Me," in July.

Before the release of the first solo album, Kang was locked in a legal battle with his former management agency, delaying his return to the K-pop scene. 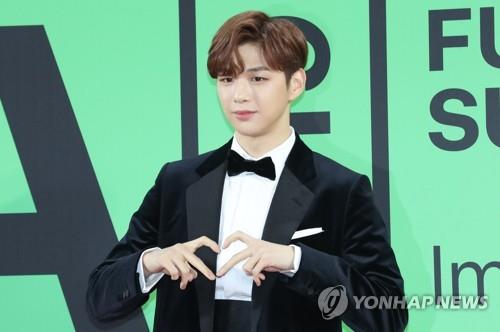