SEOUL, Dec. 4 (Yonhap) -- A long, thin pillar made up of LEDs hanging from the ceiling of the Seoul branch of the National Museum of Modern and Contemporary Art (MMCA) renders colorful messages like "A dinosaur is about to come out of the woman's body" or "She opens her eyes wide, but there's no exit left."

These lines come from "Autobiography of Death," a book of poetry written by Kim Hye-soon, along with other phrases from award-winning author Han Kang's poem "Winter Through a Mirror 11" and Emily Jungmin Yoon's "A Cruelty Special To Our Species."

American artist Jenny Holzer, known for thought-provoking text-based pieces, has unveiled her latest artwork, "For You," featuring the Korean language, at the MMCA.

Her collection of short sentences from five writers' works written in Korean and English opened on Nov. 23 and will be on display through July 5 next year. The entire series of lines takes more than four hours to cycle through. 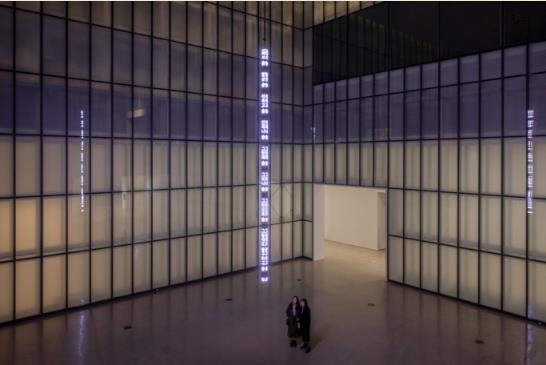 Holzer is a U.S.-born neo-classical artist who uses texts and visual effects to convey intense social and humanitarian messages. Her best-known series, "Truism" (1977-79), comprises over 250 aphoristic statements concerned with personal and societal beliefs and mores.

It is the first time the artist has used the Korean language. She picked up sentences and words from Korean poetry about tragedies in South Korean society, including the deadly sinking of the Sewol Ferry in 2014 and Japan's sexual enslavement of Korean women during World War II.

"I asked around to see what was central here as best I could," she said in a press conference in Seoul on Wednesday. "And what has been a concern of mine for a long time is what happens to women. Abuse of women is reprehensible and should be actionable. That's why I went to it."

She spent a lot of time studying the exact feeling of the Korean texts that she selected as she wanted to shed light on the most painful and saddest parts of life, rather than the bright side.

"I had to run to any number of experts to find the proper fonts, not only to function in electronics, but to have the right feeling for these texts," she said. "I tend to believe that one should address the most difficult things because these can hurt us."

Holzer said it was interesting for her to present her messages in the form of hangeul, the Korean alphabet, for the first time, and she stressed that this will more clearly convey her message to a Korean audience.

"I often work in public and so it's only sensible to use the language of the country for public pieces," she said. "I like how (Korean letters) are different from the English alphabet. Even to me, they seem to represent an image, rather than what's been quite abstracted in the English alphabet."