SEOUL, Dec. 5 (Yonhap) -- South Korean President Moon Jae-in said Thursday the Korea peace process has reached a very important stage and asked China to continue its support for progress in efforts for the complete denuclearization of the peninsula.

In a Cheong Wa Dae meeting with China's State Councilor Wang Yi, Moon stressed the importance of Seoul-Beijing partnerships in response to security and other challenges.

"Close dialogue and cooperation between the two countries will serve as power to stabilize security in Northeast Asia and overcome the uncertain situation of the global economy together," Moon said at the start of the talks, which pool reporters were allowed to cover. 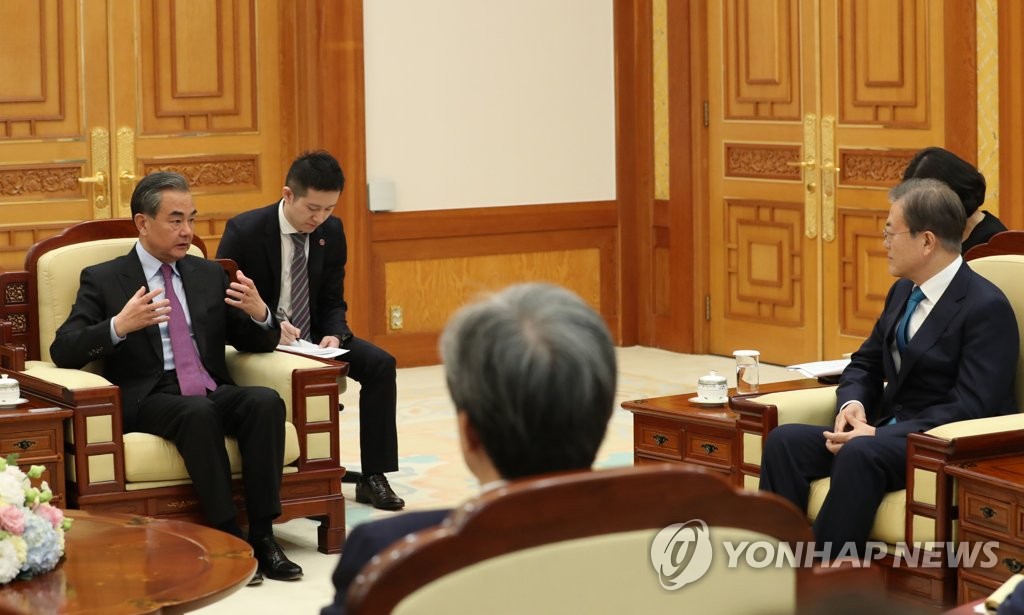 He expressed hope that an upcoming trilateral summit involving Japan will serve as a chance to deepen the relationship.

China plans to host the annual summit reportedly in the southwestern Chinese city of Chengdu late this month. The exact schedule and venue have not been announced yet.

Moon is expected to attend the session to be joined by Chinese Premier Li Keqiang and Japanese Prime Minister Shinzo Abe. Moon's office has yet to make public whether he will participate in the session.

"I am also looking forward to meeting President Xi Jinping soon," Moon told Wang, indicating that he may travel to Beijing on his way to or from the trilateral summit venue.

Moon said he wanted to meet Xi on the sidelines of the Asia-Pacific Economic Cooperation (APEC) summit, which was initially scheduled to take place in Chile in November but was canceled.

Moon requested the Chinese government's support until "an era of a new Korean Peninsula" that is peaceful and free of nuclear weapons.

"Now, the process for the complete denuclearization of the Korean Peninsula and establishment of permanent peace is facing a crucial juncture," the president said.

Wang agreed on the need for "timely cooperation" between the two sides as "neighbors."

"My visit to South Korea this time is to have strategic communication with South Korean officials," he said on his first trip here in more than five years. 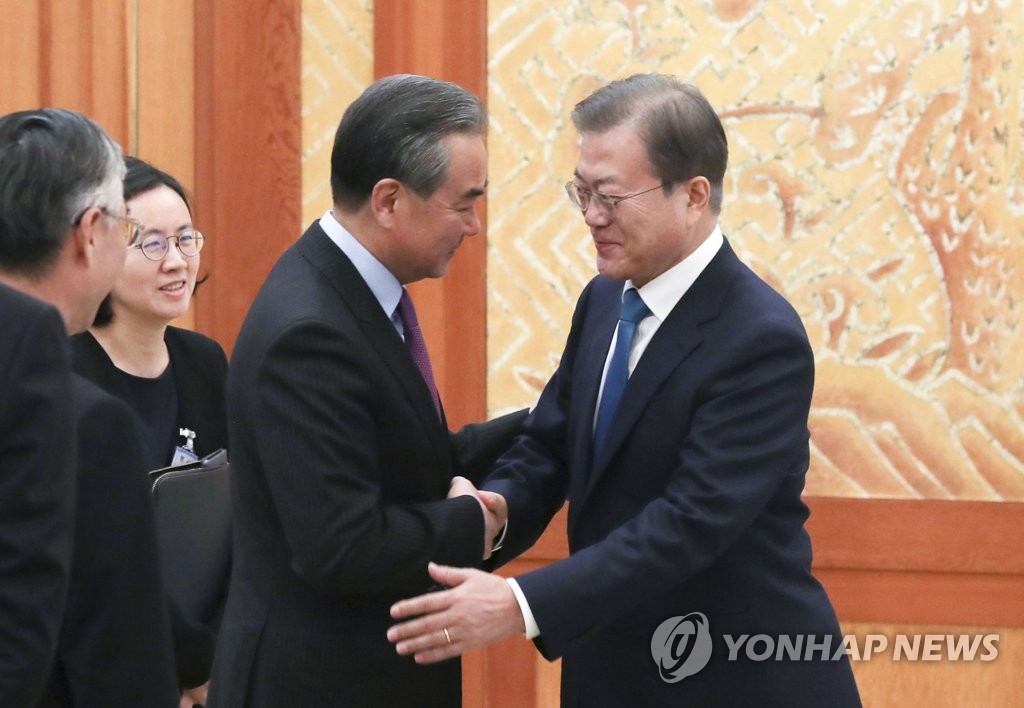 It was his first visit to South Korea since ties between the two sides were hit hard by a diplomatic controversy over the deployment of an advanced U.S. missile defense system, called THAAD here.

Wang said the international community is confronted with "the threat of unilateralism and power politics." He was apparently referring to the attitude of the Trump administration especially in a trade war.

China and South Korea should defend "multilateralism and free trade" by strengthening bilateral cooperation "at an appropriate time" and abide by "basic international norms," Wang, who doubles as foreign minister, said.

He added the issue was discussed in Wednesday's talks with his South Korean counterpart, Kang Kyung-wha.

"Yesterday, we exchanged in-depth and candid opinions on such a matter and hammered out a series of new, shared perceptions," he said.

What Seoul and Beijing should do in the next phase is to prepare for Moon's visit to China this month so that it can be conducive to an improvement not only in bilateral ties but also trilateral relations with Japan, he added.