WASHINGTON, Dec. 4 (Yonhap) -- The United States has never taken military options off the table when dealing with North Korea and has shown restraint not to respond to every North Korean provocation, a Pentagon official said Wednesday.

Heino Klinck, deputy assistant secretary of defense for East Asia, also warned that while the Pentagon has provided space for the State Department to use diplomacy to dismantle the North's nuclear weapons program, that may not always be the case.

The comments came hours after North Korea threatened to take "prompt corresponding actions" should the U.S. use military force against it. U.S. President Donald Trump had hinted in London on Tuesday that the United States could launch military action if necessary.

The exchange reflected the frustrations both sides have felt amid stalled negotiations on denuclearizing North Korea in exchange for U.S. concessions. 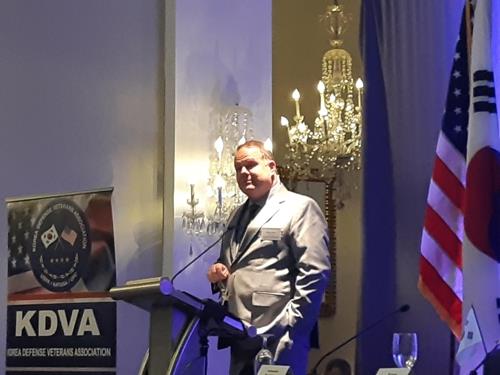 "The military option was never taken off the table," Klinck said in response to a reporter's question at a conference discussing the South Korea-U.S. alliance. "I mean, the military exists to serve as a deterrent. It serves as a stabilizing force."

North Korea has set the end of the year as the deadline by which the U.S. must show flexibility in their negotiations, suggesting it could otherwise return to testing nuclear weapons and intercontinental ballistic missiles.

"I think that North Korea also understands that if they were foolish enough to act aggressively, that there would be a very strong response from the alliance as a whole," Klinck said.

South Korean and U.S. forces train in order to deter aggression, and "if deterrence fails, it is their role to fight and win," he said.

The Pentagon has said it is supporting diplomatic efforts to denuclearize North Korea by suspending some military exercises with South Korea, including a combined air drill last month.

Klinck made clear that the allies remain ready to respond to any threat.

"We, the Department of Defense, have provided the space and intentionally so, for the diplomats of the State Department to do their work," he said. "We have shown restraint by not responding to every single North Korean provocation, whether it was a rhetorical provocation, or something like a missile test.

"There may come a time where our response may be different, and where the lead for the State Department may switch to something else," he continued. "It's our role within the Department of Defense to give our civilian leaders options."