Kia plans to manufacture a "premium multipurpose vehicle" (MPV) and an entry-level sport utility vehicle in the first and second half of 2020, respectively, mainly for sale in the Indian market, the company said in a statement.

"The company decided to produce the RV models in India as local demand for MPVs and SUVs remains strong, though the overall vehicle demand is slowing down amid a global economic slowdown," a company spokesman said.

Kia plans to unveil the premium MPV, targeted at high-income earners, at the Delhi Auto Expo in February next year.

In July, the maker of the K5 sedan and Sorento SUV began producing the entry-level SUV Seltos at its 300,000-unit-a-year plant in the state of Andhra Pradesh, located in the southeastern part of the subcontinent.

It sold a total of 40,649 Seltos models from July to November in the world's fourth-biggest automobile market after China, the United States and Europe.

The company expects the plant will be able to produce up to 64,000 Seltos models by year's end and aims to fully operate the plant within three years to export Indian-made cars to the Middle East, Latin America and other Asian countries, the statement said.

The Telluride is sold only in North American markets. It is produced in Kia's U.S. plant and was launched in the U.S., the world's most important automobile market, last year.

Both engines are equipped with a 7-speed dual clutch transmission (DCT). The dual clutch gearbox is quicker in terms of response when driven hard compared to a continuously variable transmission (CVT) gearbox. 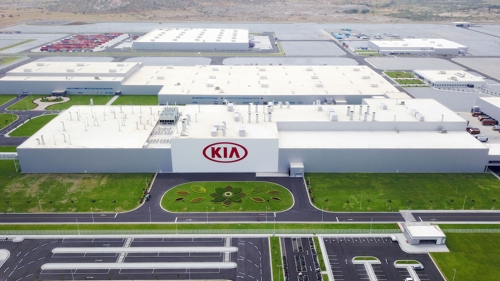