Hecker, known for his direct experience with the North's nuclear program, also urged Pyongyang to return to the negotiating table, stressing that Washington has signaled its willingness to show flexibility in the hitherto unfruitful nuclear negotiations.

"I would call it a tailored sanctions relief. I would tailor them in such a way to promote the North-South economic development. It draws the North close to the South. It gets them some economic benefit," the expert said in an interview with Yonhap News Agency.

"As you do that step by step, that's in essence how you develop some trust that lets you go to the final goal, which is elimination of nuclear weapons and the means to produce them, and integration of North Korea into the community of nations and the international economic system," he added. 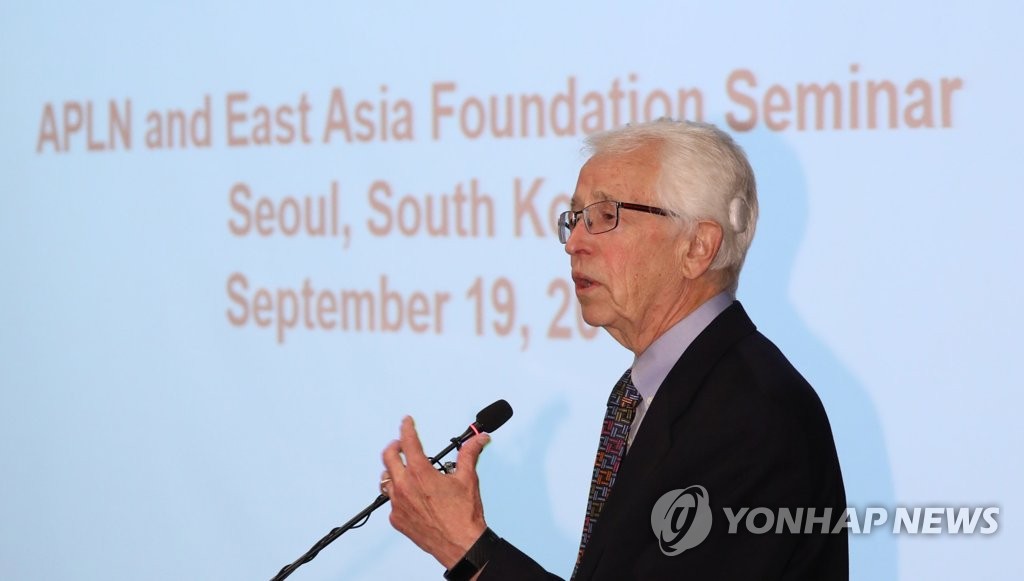 Hecker was in Seoul to attend a forum on geopolitics and the denuclearization of the North hosted by the Korean National Diplomatic Academy and the Asia-Pacific Leadership Network.

His remarks came amid the deadlock in nuclear negotiations between Washington and Pyongyang, which remain far apart over the scope of the North's denuclearization steps and what should be given in return.

The two sides held the last working-level negotiations in Sweden in October, but the talks ended fruitlessly with the North accusing the U.S. of having come to the negotiating table "empty handed."

Skepticism has recently risen over the dialogue process involving the North, which has recently been ratcheting up tensions by pressing ahead with provocative military drills, launching short-range projectiles and hardening its rhetoric against Seoul and Washington.

"At this point, I would say I am pessimistic and concerned that North Korea has chosen not to engage and not to be willing to listen because the U.S. has -- indeed I think -- a different position today than it did back in Hanoi," he said.

Hecker was referring to the no-deal summit in February in the Vietnamese capital between U.S. President Donald Trump and North Korean leader Kim Jong-un.

"North Korea has to listen. Unless they show some signs of being willing to listen, then I am on the pessimistic side," he added.

The expert also reiterated that the dismantlement of the North's main nuclear complex in Yongbyon, north of Pyongyang -- which was discussed at the Hanoi summit -- would be a good point to start in earnest the regime's disarmament process, despite concerns that the complex is only a piece of the North's nuclear juggernaut.

"I would call it a huge step. There is no question. The Yongbyon complex is not old, it's not dilapidated. They have continued to upgrade that complex. The centrifuge plant is working right now," he said.

"It is not everything, but in the same way the U.S. is not going to normalize everything, we can't expect North Koreans to give up everything. But what is important now is to take some steps and Yongbyon would be a very big step," he added.