A total of 641,000 female contract workers had kids under 18 as of April this year, or about 28 percent of the 2.3 million working mothers aged from 15 to 54 here, according to the latest data compiled by Statistics Korea.

The number of irregular working moms with underage children has decreased from 41,000 a year ago, the state agency said.

The number of working moms who runs their own businesses stood at 538,000, down 47,000 over the cited period, the data showed.

"Female workers with a career gap will experience difficulties in regaining status as full-time regular workers, regardless of their past employment status," a Statistics Korea official said.

Contract workers are prone to shorter working hours and paid lower wages, according to the data.

About 10.2 percent of all working mothers with minor children earned less than 1 million won (US$840) per month. The country's minimum monthly wage for full-time workers in December is about 1.75 million won. 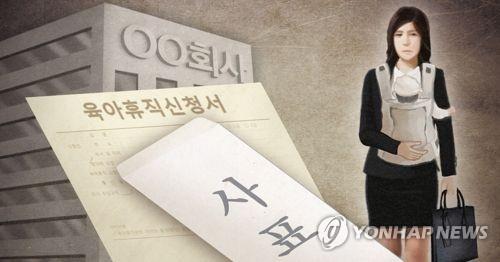 Some 30 pct of working moms were irregular workers: data

Some 30 pct of working moms were irregular workers: data