SEOUL, Dec. 6 (Yonhap) -- A local court on Friday ruled in favor of toll collectors demanding their direct employment by a state-run operator of expressways.

The Gimcheon branch of the Daegu District Court in Gimcheon, North Gyeongsang Province, said the Korea Expressway Corp. (KEC) has an obligation to directly hire its toll collectors who now belong to a subsidiary of the state-run company or were fired for their refusal to join the subsidiary.

The ruling came after 4,120 toll collectors filed three separate lawsuits asking the court to determine their employment status. The lawsuits were filed in Gimcheon, 234 kilometers southeast of Seoul, where the headquarters of the KEC is located. Some plaintiffs were disqualified due to insufficient documents.

The district court's verdict is in line with August's Supreme Court ruling, which recognized tollgate workers as KEC employees in a lawsuit launched by 499 toll collectors. 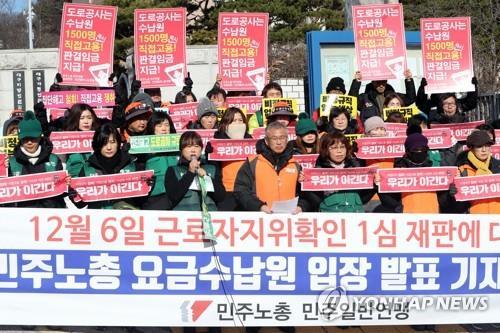 The legal dispute at the KEC began after the state-run company set up a toll collecting subsidiary, called Ex-service, in January this year to directly hire about 6,500 toll collectors, previously hired by outsourcing contractors, in accordance with the Moon Jae-in government's policy of switching all non-regular workers in the public sector to regular status.

About 5,100 of the 6,500 toll collectors agreed to become Ex-service employees, but the remaining 1,400 collectors affiliated with the militant Korean Confederation of Trade Unions (KCTU) refused to join the subsidiary and launched a sit-in at the KEC headquarters to demand their direct employment by the state-run firm.

The Gimcheon court ruled that specific work instructions from the KEC suggest worker dispatch contracts with toll collectors, as well as its direct employment obligation.

Despite the ruling, however, the KEC's direct employment of toll collectors seem unlikely, as 3,500 of the 4,120 plaintiffs had already relinquished their rights in their employment contracts. They are expected to be paid wage differences instead.

The remaining 600 plaintiffs who were fired after refusing to work for the KEC subsidiary may receive benefits in employment status.

"It is difficult to exactly confirm the number of beneficiaries as some plaintiffs were disqualified. We'll know the exact results after obtaining the written court ruling," a KCTU official said.

Meanwhile, defiant toll collectors participating in the sit-in at the KEC headquarters since Sept. 9 said they will continue to struggle until the KEC agrees to directly employ all toll collectors.