SEOUL, Dec. 7 (Yonhap) -- A large protest rally against the prosecutors' office took place in Seoul on Saturday, as it's widening probes into suspicions involving Cheong Wa Dae in connection with last year's Ulsan mayor election and an arrested former vice mayor of Busan.

Participants in a demonstration held in front of the National Assembly in western Seoul condemned the prosecution, led by Prosecutor-General Yoon Seok-youl, for the ongoing investigations into allegations that Cheong Wa Dae meddled in the Ulsan election and was negligent in inspecting Yoo Jae-soo, who was vice mayor of Busan.

Yoo is alleged to have taken bribes from businesses when he served as director-general of the Financial Services Commission in 2017. Cheong Wa Dae's special inspection team was apparently aware of his alleged corruption.

He evaded punishment and became Busan's vice mayor in charge of economic affairs in 2018, although he was arrested recently. Yoo is known to have close personal ties with President Moon Jae-in. 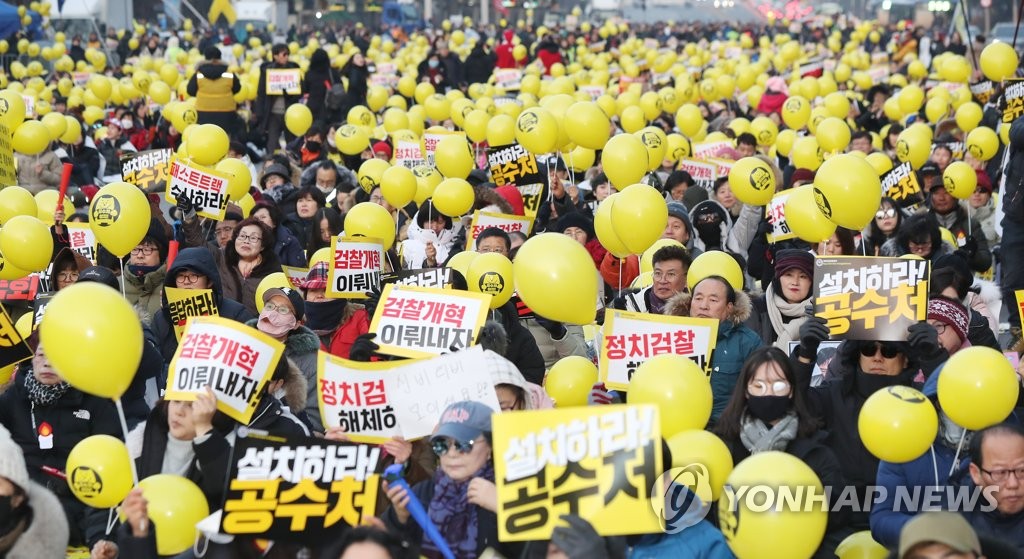 State prosecutors are also looking into allegations that Cheong Wa Dae pulled strings in a police investigation into corruption-related suspicions involving one of the closest aides to Kim Gi-hyeon, who was Ulsan mayor and seeking reelection last year.

His election rival was Song Cheol-ho of the ruling Democratic Party, a longtime friend of Moon. Song eventually won the June 13 election.

Cheong Wa Dae has flatly denied all relevant allegations, and those taking part in the rally claimed the prosecution is going too far to damage Moon and the ruling party amid no concrete evidence.

They demanded the passage of a prosecution reform bill pending at the National Assembly.

A civic coalition that organized the rally stressed that the main opposition Liberty Korea Party should retract a filibuster intended to block the handling of the bill and other reform ones.

Another group of activists staged a rally in front of the Supreme Prosecutors Office in southern Seoul.

They accused the prosecution of being politically motivated and infringing on human rights, citing its probe into the family of Cho Kuk, a former justice minister.