"I'd be surprised if North Korea acted hostilely," Trump was quoted as telling reporters at the White House. "He knows I have an election coming up. I don't think he wants to interfere with that. But we'll have to see."

The remark came as the North has increased pressure on the United States to meet its demand for a new negotiating proposal by year's end, strongly suggesting that otherwise, it could restart testing of nuclear weapons and intercontinental ballistic missiles (ICBMs).

Trump has touted the North's suspension of nuclear and ICBM tests as one of his key achievements.

Trump warned in response that the U.S. may use military force against North Korea if necessary and referred to North Korean leader Kim Jong-un as "Rocket Man." The North said Trump's remarks, if deliberate, should be "diagnosed the relapse of the dotage of a dotard." 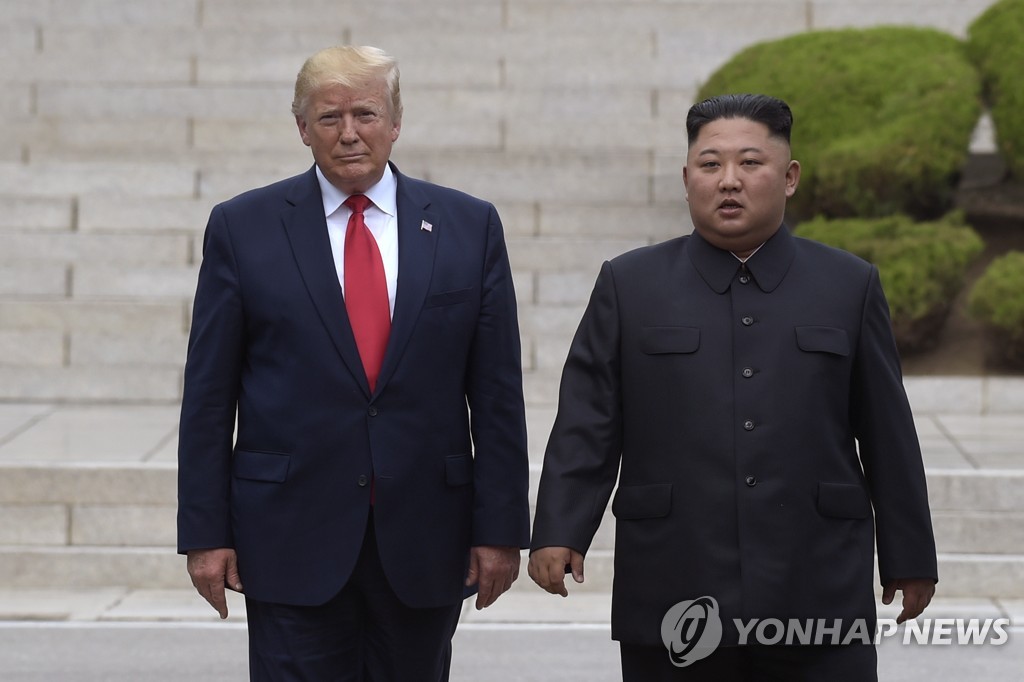 Earlier Saturday, North Korea's ambassador to the United Nations, Kim Song, said that denuclearization has already been taken off the negotiating table with the U.S.

"We do not need to have lengthy talks with the U.S. now and denuclearization is already gone out of the negotiating table," Kim said in a statement issued after Britain and five other European nations condemned the North's "continued testing of ballistic missiles."

Trump, meanwhile, insisted he has "a very good relationship" with Kim Jong-un and added, "I think we both want to keep it that way."

"I think he'd like to see something happen," Trump said. "But there is a certain hostility. There's no question about it."

As for the state of inter-Korean ties, Trump said, "I don't know that (Kim's) relationship with South Korea is very good. But we're going to find out."

There has been scant progress in denuclearization talks between the U.S. and North Korea, following the collapse of the second Trump-Kim summit in February.

Pyongyang has set a year-end deadline for Washington to offer concessions in nuclear talks. It has threatened to terminate the dialogue phase and adopt a "new way" if the U.S. refuses to change tack.
(END)

(LEAD) Trump warns N. Korea not to interfere with his reelection bid

(LEAD) Trump warns N. Korea not to interfere with his reelection bid