SEOUL, Dec. 9 (Yonhap) -- South Korea has been working closely with the United States to analyze a "very important test" that North Korea claimed to have conducted at its satellite launching site over the weekend, the defense ministry said Monday.

The communist country said Sunday that it carried out the test successfully at its Sohae Satellite Launching Ground, referring to its Dongchang-ri site in North Pyongyan Province, the previous day.

Pyongyang did not elaborate on what it tested but noted that results "will have an important effect on changing the strategic position of the DPRK once again in the near future." The DPRK stands for the North's official name, the Democratic People's Republic of Korea.

"We are aware of North Korea's announcement. In close coordination with the U.S., we keep close tabs on moves in major sites in North Korea, including the Dongchang-ri site," ministry spokesperson Choi Hyun-soo told a regular briefing.

She, however, refused to make public their initial assessment of the test. 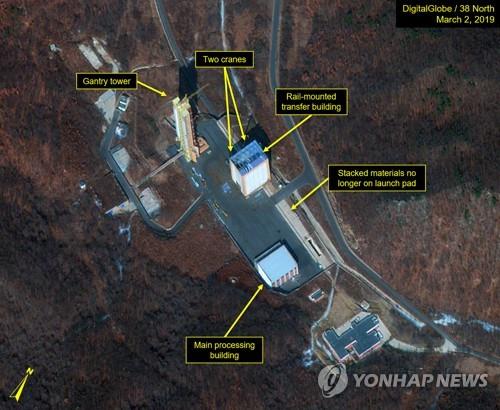 The North is believed to have tested a new type of engine for long-range rockets or intercontinental ballistic missiles (ICBMs) as South Korea's Joint Chiefs of Staff (JCS) said that nothing has been fired from the site and recent satellite imagery shows signs of preparing for a missile engine test there.

North Korea has used the site to test rocket engines and launch vehicles to deliver satellites, and such technology could be diverted to develop and launch long-range weapons, according to analysts.

In March 2017, North Korea successfully tested a new high-thrust engine at the station, which was employed to launch ICBMs, such as the Hwasong-14 and Hwasong-15, later that year.

The North's Academy of National Defence Science, which issued the statement Sunday regarding the recent test, is in charge of developing and testing advanced weapons, including a new type of submarine-based ballistic missile and super-large multiple rocket launcher that the North boasted in recent months.

"North Korea appears to have tested a rocket engine," a military source said, citing history and facilities at the Sohae station.

"Vehicles and objects appear on December 7 to conduct the test. They are mostly gone on December 8, but the ground appears to have been disturbed by the exhaust from the test," he tweeted on Monday.

But experts were divided on whether the test employed solid fuel or it was designed to upgrade its previous liquid fuel-type engine.

"The Dongchang-ri site has facilities only for testing liquid fuel engines," the source added without further elaboration.

Pyongyang has been trying to convert its liquid fuel-based long-range missiles into solid fuel ones. Solid fuel is easier to manage and faster to load onto projectiles so as to make it more difficult for the U.S. and South Korean military to detect them.

In June last year after his summit with North Korean leader Kim Jong-un, Trump said Kim promised to dismantle the Donghang-ri site. During his summit with South Korean President Moon Jae-in in September last year in Pyongyang, Kim made the same pledge.

North Korea's tinkering with the ICBM tests came as the year-end deadline that Pyongyang set for Washington to show flexibility to move their stalled denuclearization talks forward is drawing near.

In November 2017, North Korean leader Kim Jong-un announced a halt to all its nuclear and ICBM tests, which Trump has touted as one of his key diplomatic achievements, and Kim's self-imposed moratorium did not cover missile engine tests.

But U.N. Security Council resolutions ban North Korea from conducting tests that could be used to build ballistic missiles.

Amid stalled denuclearization talks, North Korea has carried out a series of weapons tests in recent months mostly involving short-range missiles. The latest one took place on Nov. 28, when Pyongyang tested its super-large multiple rocket launcher. 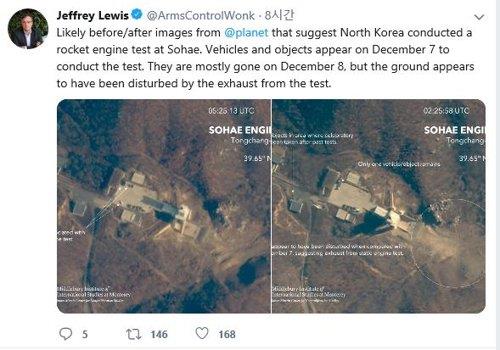