SEOUL, Dec. 9 (Yonhap) -- The ruling Democratic Party (DP) and two major opposition parties in South Korea agreed Monday to put the operation of the National Assembly back on the normal track but left uncertainties unresolved over fast-tracked bills on electoral and prosecution reform.

They have decided to open the parliament's plenary session at 10 a.m. Tuesday to handle next year's state budget bill, according to Rep. Shim Jae-chul, new floor leader of the main opposition Liberty Korea Party (LKP).

He was briefing on the results of talks with his DP counterpart, Rep. Lee In-young, and Rep. Oh Shin-hwan, floor leader of the smaller opposition Bareunmirae Party. The meeting was arranged by National Assembly Speaker Moon Hee-sang.

The ruling party agreed to put the contentious fast-tracked bills on the back burner, while the LKP would withdraw a filibuster. 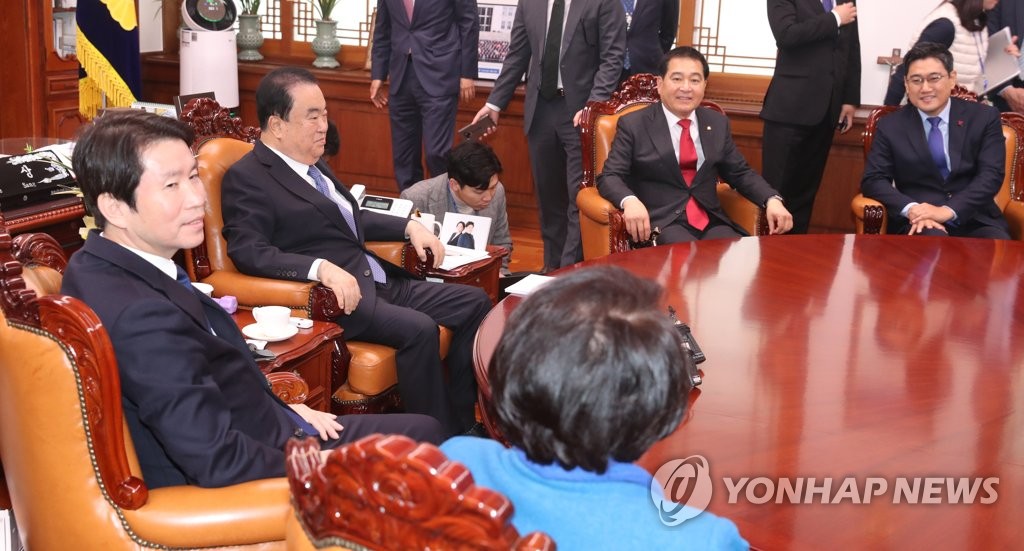 In the plenary session to be held on the last day of this year's regular session of the National Assembly, they are expected to handle a number of bills related to the people's living, which are less controversial politically.

They also plan to hold a meeting of the Legislation and Judiciary Committee later Monday to review three bills on the use of big data.

At issue is whether and when to put the electoral and prosecution reform bills to vote. One election-related bill calls for the expansion of proportional representation to fill the 300-member unicameral National Assembly. The next general elections are slated for April 15, 2020. Bills on prosecution reform are meant to create a non-prosecution unit to probe corruption by high-ranking government officials, including senior state prosecutors, and give police more investigative authority.

The LKP is fiercely opposed to the proposed legislation, claiming they are designed only to prolong the power and reign of the current ruling bloc.

Earlier in the day, the LKP elected Shim, a five-term lawmaker, as its floor leader.

The LKP said it will withdraw the filibuster only on the condition that it and the two other parties reach an agreement on the budget bill.

"When we reach an agreement on the budget bill, all other issues will also be settled," Shim said.

Shim claimed, however, that the agreement will depend on how negotiations proceed at the parliamentary special committee on budget and accounts.