SEOUL, Dec. 9 (Yonhap) -- South Korea will be blanketed by fine dust until the middle of this week, after cold spell abated over the weekend, meteorologists said Monday.

As the cold weather began to ease up on Saturday, almost all parts of the nation came under the influence of thick fine dust concentrations.

According to Air Korea, run by the Korea Environment Corp., ultrafine dust will remain at high levels in most parts of the country until Wednesday due to a steady influx of dust particles from China. 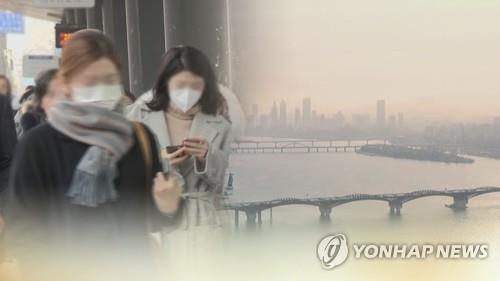 As the cold Siberian high pressure weakened, the warm westerly winds carrying Chinese fine dust began to flow over the peninsula, they explained.

In recent years, a phenomenon of three cold days followed by four fine dust days has become common, they noted.

The Korea Environment Corp. said ultrafine dust is expected to surge to very bad levels in Incheon and Gyeonggi Province, in particular, on Tuesday.

"From late Wednesday, strong and fast northwesterly winds will flow over the peninsula, dispersing accumulated fine dust particles. On Thursday, the sky will clear up, while the temperature will again fall," said a corporation official.