The American ace, now a free agent after winning the Korea Baseball Organization (KBO) MVP for the Doosan Bears, became the first foreign pitcher to win multiple Golden Gloves at the annual ceremony in Seoul. He earned 268 out of 347 votes cast by baseball writers, broadcasters and analysts.

Lindblom is also the first pitcher, foreigner or South Korean, to win consecutive Golden Gloves since Chong Min-tae, who won in 1998 and 1999. 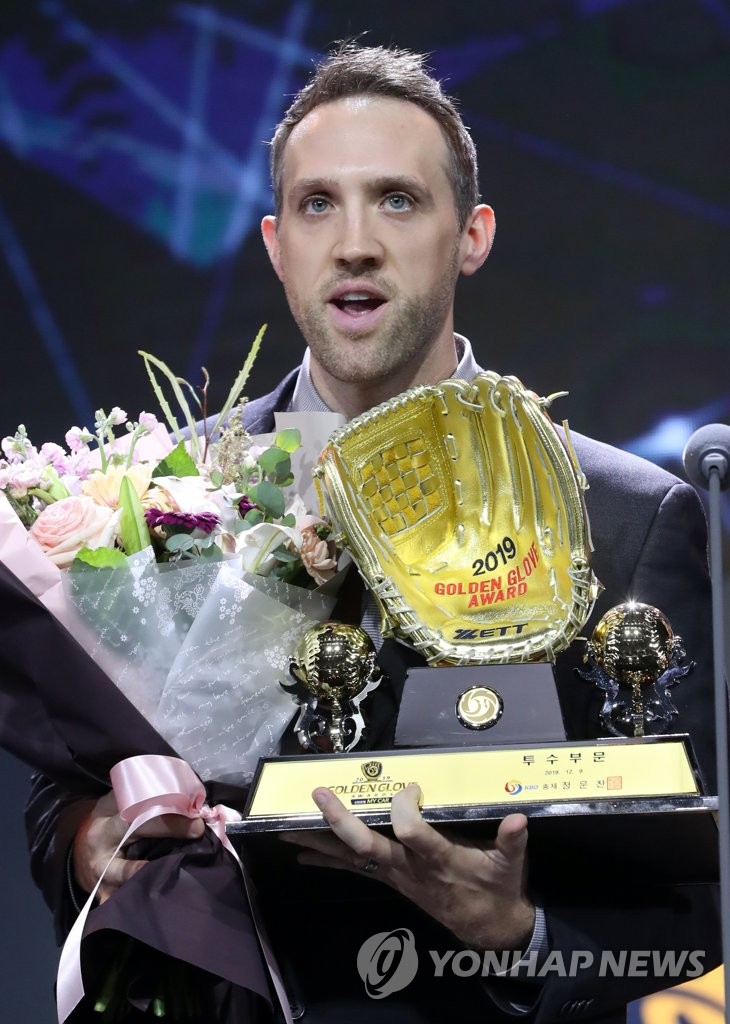 Lindblom won the MVP award in a landslide last month, after going 20-5 with a 2.50 ERA and 189 strikeouts. He led the KBO in wins and strikeouts and finished second in ERA to come up one category shy of winning the pitching Triple Crown.

After five seasons in the KBO, including the last two with the Bears, Lindblom is seeking a return to Major League Baseball (MLB). The 32-year-old has reportedly drawn interest from multiple big league clubs.

NC Dinos' catcher Yang Eui-ji, the MVP runner-up to Lindblom, picked up his second straight Golden Glove and his fifth overall with 316 votes. Yang is now two behind the all-time leader, Kim Dong-soo, who won his seven with three different clubs.

Yang batted .354 to capture his first batting title this year and led the league with a .438 on-base percentage and .574 slugging percentage, while playing his typically steady defense behind the plate.

At shortstop, Kiwoom Heroes' Kim Ha-seong won his second straight Golden Glove with 325 votes, the most by any winner this year. Kim led the KBO with 112 runs scored and ranked second in both RBIs (104) and steals (33). He came up just one home run shy of his second career 20-20 season. 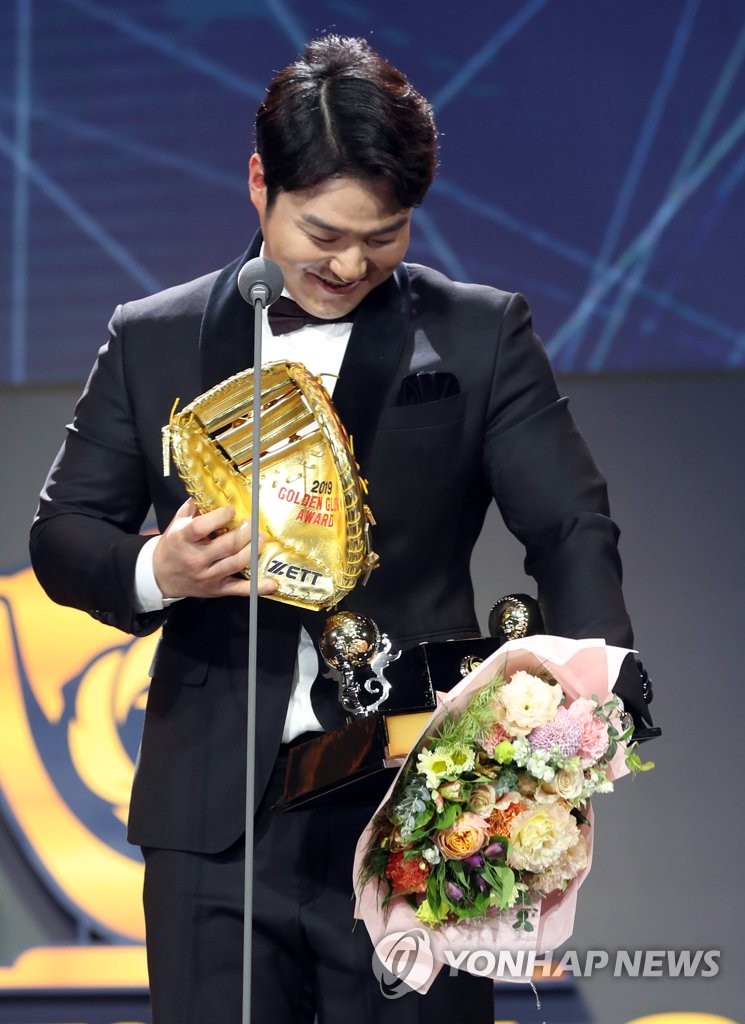 Park Min-woo of the NC Dinos was the first-time winner at second base, earning 305 votes for a breezy victory. The seven-year pro batted .344 to rank third overall and ranked fifth in runs scored (89) and on-base percentage (.403).

At third base, Choi Jeong of the SK Wyverns picked up his sixth Golden Glove. He tied for second in the KBO with 29 home runs and also ranked in the top 10 in RBI, on-base percentage, slugging percentage and runs scored. Choi had 271 votes, while the 2018 winner, Hur Kyoung-min of the Doosan Bears, finished a distant second with 57.

Lee led all outfielders with 315 votes for his second straight Golden Glove. It was the first Golden Glove for Sands (211 votes) and Rojas (187). No other outfielder surpassed the century mark in votes.

Lee ranked second in hits and fourth in batting average and runs scored. Sands led the KBO with 113 RBIs and finished in the top five in runs scored, slugging percentage and home runs. 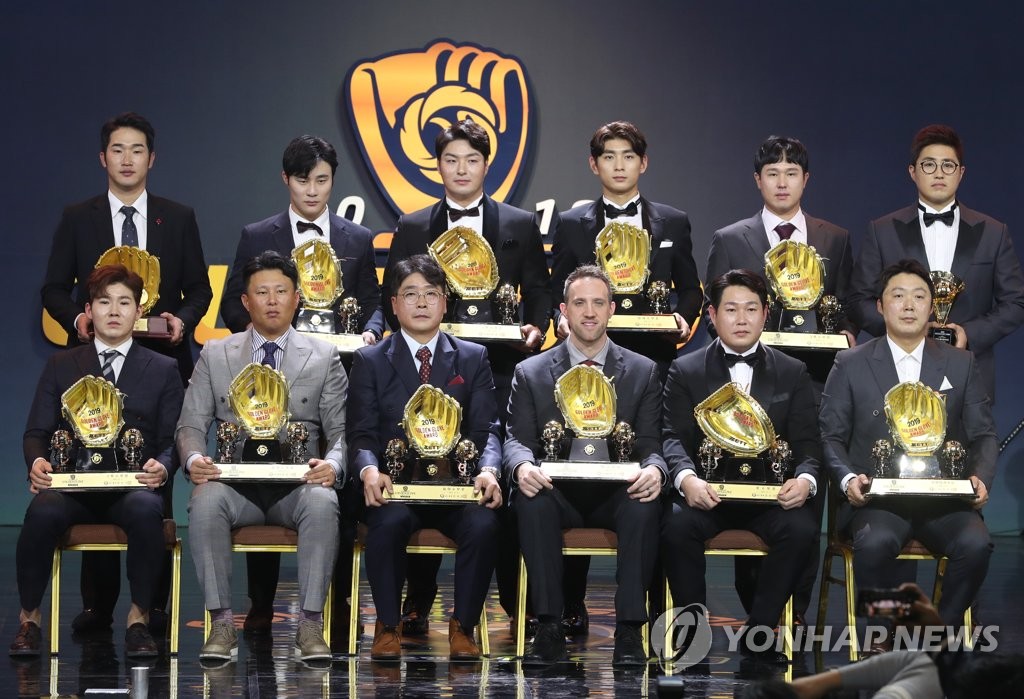 Rojas, one of the most notable snubs last year, finally got his Golden Glove after tying for second in RBIs and tying for third in hits.

Jose Miguel Fernandez of the Bears earned his first Golden Glove at designated hitter (DH) with 307 votes. In his first KBO season, the Cuban hitter led the KBO with 197 hits and ranked second with a .344 batting average.

The Heroes produced the most winners with four.

Lindblom was one of a record four foreign winners of the Golden Gloves. The previous mark was three from the 2015 season, when Eric Hacker (pitcher), Eric Thames (first base) and Yamaico Navarro (second base) took home trophies.

For the DH category, all players who appeared as DH in at least two-thirds of the minimum plate appearances to qualify for the batting title (297) were automatically nominated.