(ATTN: UPDATES with expansion of emergency measures in paras 15-17 )

SEOUL, Dec. 10 (Yonhap) -- Ultrafine dust concentrations surged to "very bad" levels in the Seoul metropolitan area Tuesday, due largely to a steady influx of Chinese smog into the stagnant air over the Korean Peninsula, forcing local governments to issue a fine dust advisory.

According to the Air Quality Forecasting Center affiliated with the Ministry of Environment, the entire nation, excluding Jeju Island, posted ultrafine dust readings above bad levels throughout the day.

PM 2.5, or fine dust particles smaller than 2.5 micrometers in diameter, soared to 108 micrograms per cubic meter in Seoul, 113 micrograms in Incheon and 102 micrograms in Gyeonggi Province as of 3 p.m. The PM 2.5 reading also jumped to 77 micrograms in the central province of South Chungcheong.

The air forecasting center said ultrafine dust figures will further rise in Seoul and the country's central regions on Wednesday because of continuing inflows of Chinese smog. 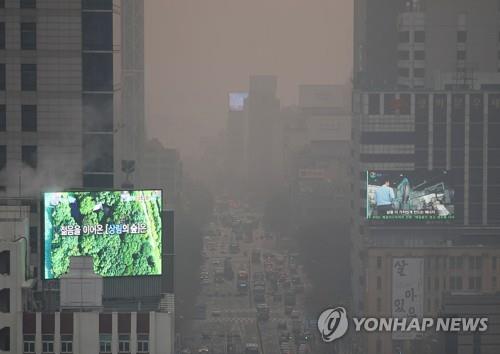 The weather authorities categorize the concentrations of PM2.5 particles between 0 and 15 micrograms per cubic meter as "good," between 16 and 35 as "normal," between 36 and 75 as "bad," and more than 76 as "very bad."

The Seoul metropolitan government issued an ultrafine dust advisory at 1 p.m., as the city's PM 2.5 figure remained above 75 micrograms per cubic meter for longer than two hours.

Municipal officials asked citizens with respiratory or cardiovascular problems, children and other vulnerable people to refrain from going outdoors, saying fine dust particles can cause various ailments and undermine the body's immune system. They also asked that citizens wear masks when going outdoors or engaging in outdoor activities.

Almost all cities and counties in Gyeonggi Province, which surrounds Seoul, and the Daegu metropolitan government also issued an ultrafine dust advisory for the first time this winter.

The air forecasting center attributed the latest surge in fine dust to westerly and southwesterly winds blowing in smog from China.

It explained the warm westerly winds carrying Chinese ultrafine dust particles began to flow over the peninsula over the weekend, when the cold Siberian high pressure weakened.

Some officials and experts say a phenomenon of three cold days followed by four fine dust days appears to have solidified in South Korea in wintertime.

Indeed, the center forecast that the nation will be blanketed by thick fine dust concentrations until Wednesday, while daily high temperatures will rise to 7-17 C.

It said the domestic air quality was significantly affected by smog blowing in from China. Indeed, PM 2.5 figures in major Chinese cities reached 150 to 200 micrograms per cubic meter on Tuesday, about 15 to 20 times higher than the World Health Organization's recommended level of less than 10 micrograms.

"If the fine dust that has spread to the upper atmosphere amid high daytime temperatures begins to settle again during nighttime, the air quality may further worsen Wednesday morning," a center official said. "Fine dust concentrations are expected to weaken starting late Wednesday afternoon, when winds blow from the northwest," the official said. 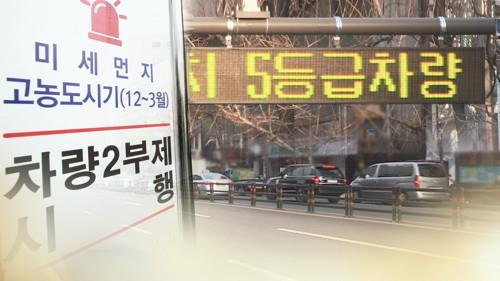 Meanwhile, the Ministry of Environment announced a plan to expand a set of emergency steps to curb the spread of air pollution in nine major cities and provinces.

The measures include stricter regulations on the use of high-emission vehicles. Vehicles with odd- and even-numbered license plates belonging to administrative and public agencies are also required to drive on alternate days. The operation of petrochemical plants, refineries and cement factories is limited, along with that of waste incineration and sewage treatment facilities.

Between 6 a.m. and noon, a total of 10,012 grade 5 emission vehicles were caught on 95 surveillance cameras operating in Seoul. Of them, the owners of 4,530 vehicles that are not fitted with emission reduction devices will be fined 100,000 won (US$84), Seoul officials said.

In the capital and North Chungcheong areas, an alternate no-driving day system was implemented for vehicles owned by public institutions and civil servants. On Tuesday, only public vehicles with even-numbered license plates were allowed on the roads.