South Korea has so far brought in 12 F-35As, beginning with two in late March, under a plan to deploy a total of 40 fifth-generation jets through 2021. By the end of this year, one more unit is to arrive here.

"We plan to hold a fielding ceremony within this month to be presided over by the Air Force chief of staff," Lt. Col. Cho Se-young told a regular briefing, adding the military is "setting up details about the event."

The upcoming ceremony means that the aircraft is capable of carrying out operations at least to a limited extent, he added.

Sources say the ceremony is scheduled to take place around early next week at the Air Force's 17th Fighter Wing base in the central city of Cheongju, North Chungcheong Province.

"How much we publicize the event is yet to be decided. We are discussing the matter with the defense ministry, as well as the U.S. side," a military source said.

During the Armed Forces Day event in October, the Air Force showcased the next-generation fighters to the public for the first time. 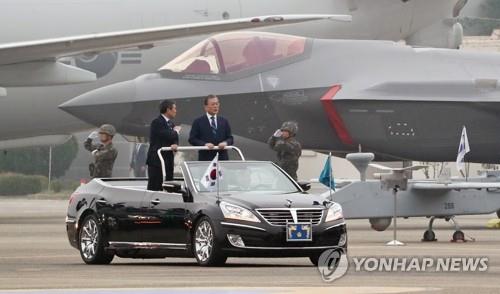