The unemployment rate decreased 0.1 percentage point on-year, and the number of employed people reached 27.5 million in November, according to the data compiled by Statistics Korea.

The unemployment rate for young adults -- those aged between 15 and 29 -- also fell to 7 percent last month from 7.9 percent tallied a year earlier.

It marked the fourth straight month that the number of added jobs has exceeded the 300,000 level.

The statistics agency said the number of unemployed people stood at 866,000 in November, down 43,000 from a year earlier.

By industry, the health and social welfare sectors added 135,000 jobs, and the culture, sports and leisure-related service segment saw an increase of 82,000 jobs last month.

"In November, the number of employees in health and leisure-related businesses rose," Chung Dong-wook, head of employment data at Statistics Korea, told reporters. 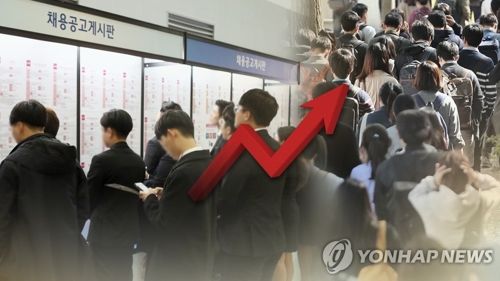 In a statement, the Ministry of Economy and Finance said there are signs of a solid recovery in the job market, while the jobless rate has been on a steady decline.

The upbeat jobs data came amid worries that Asia's fourth-largest economy is losing its growth momentum in the face of falling exports and weak domestic demand.

Last month, the Bank of Korea left its policy rate unchanged at 1.25 percent, while cutting this year's growth outlook to 2 percent from 2.2 percent.

South Korea's export-reliant economy is grappling with the lengthy trade war between the United States and China, and a cyclical downturn in the global chip industry.

The nation's economy grew a less-than-expected 0.4 percent in the third quarter of this year, marking a slowdown from a revised 1 percent on-quarter expansion in the April-June period.

South Korea's exports sank 14.3 percent in November from a year earlier, extending their slump to a 12th consecutive month.