A constant influx of Chinese smog into the stagnant local air has led to a spike in ultrafine dust figures to bad levels in almost all parts of South Korea, excluding Jeju Island, since the weekend, according to the Air Quality Forecasting Center affiliated with the Ministry of Environment. 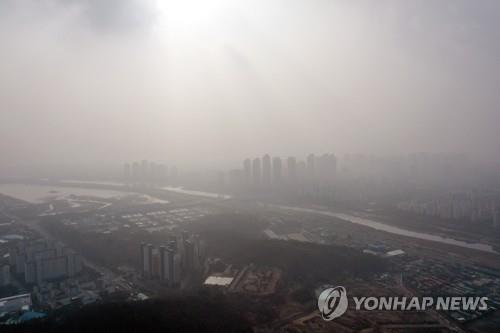 But the Korea Meteorological Administration said thick fine dust concentrations will disappear beginning Wednesday night, when cold winds from the northwest will stream into the peninsula. It also forecast temperatures will fall by more than 10 C nationwide on Thursday due to the northwesterly cold winds.

According to the air forecasting center, PM 2.5, or fine dust particles smaller than 2.5 micrometers in diameter, jumped to 118 micrograms per cubic meter in Seoul, 106 micrograms in Gyeonggi Province surrounding the capital and 90 micrograms in Incheon as of 10 a.m. Wednesday. The PM 2.5 reading also rose to 85 micrograms in the southeastern city of Daegu.

The weather authorities categorize concentrations of PM 2.5 particles between 0 and 15 micrograms per cubic meter as "good," between 16 and 35 as "normal," between 36 and 75 as "bad" and more than 76 as "very bad."

PM 10, or fine dust particles smaller than 10 micrometers in diameter, also soared to 170 micrograms per cubic meter in Seoul, 155 in Gyeonggi and 144 in Incheon. PM 10 levels between 81 micrograms and 150 are classified as bad.

An ultrafine dust advisory was issued in Gyeonggi at 10 a.m., as the province's PM 2.5 figure remained above 75 micrograms per cubic meter for longer than two hours.

The Seoul Metropolitan Government also issued a fine dust advisory at 11 a.m., as the city's PM 10 reading remained above 150 micrograms for longer than two hours. An ultrafine dust advisory issued in Seoul on Tuesday afternoon still remains in effect.

Government officials asked citizens with respiratory or cardiovascular problems, children and other vulnerable people to refrain from going outdoors, saying fine dust particles can cause various ailments and undermine the body's immune system. They also asked that citizens wear masks when going outdoors or engaging in outdoor activities.

Faced with the rising fine dust pollution, local governments in the capital area and the central province of North Chungcheong enforced their emergency emission reduction measures for the second consecutive day, while the authorities in Busan, Daegu and other central and southern provinces implemented their first emission reduction steps this winter.

Under the emergency measures, the use of grade 5 emission vehicles is banned from 6 a.m. to 9 p.m.

An alternate no-driving day system was also implemented in those affected areas for vehicles owned by public institutions and civil servants. On Wednesday, only public vehicles with odd-numbered license plates were allowed on the roads.