SEOUL, Dec. 11 (Yonhap) -- South Korea is expected to push ahead with the decontamination of the four United States military bases that were returned to it Wednesday before settling the clean-up costs on concerns the camps may pose a threat to the public's health.

Following a yearslong delay caused by gaps with Seoul on decontamination procedures, the U.S. returned four bases here -- Camps Eagle and Long in Wonju, 130 kilometers east of Seoul; parts of Camp Market in Bupyeong, just west of Seoul; and the Shea Range parcel at Camp Hovey in Dongducheon, just north of Seoul. They were closed between 2009 and 2011.

The two sides agreed on the return of the bases on the condition that they continue consultations on responsibilities for base decontaminations, ways to strengthen the environmental management of installations currently under U.S. Forces Korea (USFK) control and other related issues, according to Seoul officials. 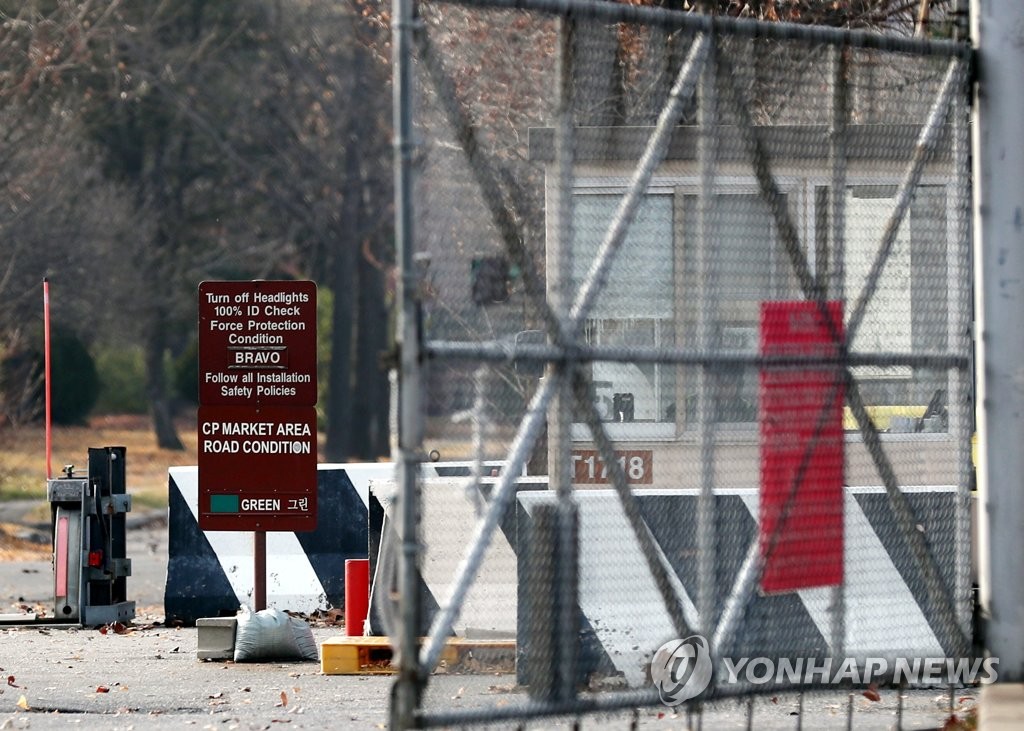 With the base return, the government is expected to carry out the decontamination process for the four sites where soil and groundwater pollution is known to be critical.

While the government has not disclosed the details of environmental research conducted between 2014 and 2016, the level of oil and heavy metal pollutants in the areas is known to have exceeded the threshold.

A study of Camp Market in Bupyeong released in 2017 showed that the site was contaminated with toxic pollutants such as dioxin, tetrachloroethylene and polychlorinated biphenyl. Decontamination procedures have started at the site.

The government's earlier research indicated that the decontamination process, which usually takes around two years, may cost up to 110 billion won (US$921 million).

The government plans to fund the clean-up operations first and consider filing part of the cost with the USFK afterward.

The settlement, however, is unlikely to be clean-cut. While the government has constantly raised the need for the USFK to pay for the decontamination, the American side has denied such responsibility.

The U.S. has returned 54 of the 80 military bases that are scheduled to be returned, but no clean-up expenses have been reimbursed so far.

USFK established its Yongsan headquarters in July 1957 after the end of the 1950-53 Korean War.

A large group of U.S. troops first entered the peninsula in September 1945, less than a month after Korea was liberated from Japan's 36-year-long colonial occupation. Their mission was to disarm Japanese troops south of the 38th parallel, a line drawn by the United States and the then-Soviet Union.

As part of its postwar military realignment, Washington began curtailing its troops in East Asia, then a region of less strategic significance than Europe. In June 1949, it withdrew all troops in Korea except for some 500 of the U.S. Military Advisory Group.

Following the North's invasion into the South on June 25, 1950, American troops returned to the peninsula to defend the South under a U.N. mandate. During the Korean War, the U.S. dispatched more than 320,000 troops to the South.

Currently, the USFK maintains some 28,500 troops. But the troop level can drop below that number or swell to over 30,000 due to the presence of rotational units or training exercises.